L.A. Guns consisting of lead vocalist Phil Lewis, guitarists Tracii Guns and Ace Von Johnson, bassist Johnny Martin and drummer Shane Fitzgibbon have released a video for new song titled “Rage” from their upcoming new studio album The Devil You Know, which will be released via Frontiers Music Srl on March 29, 2019. The group had previously released the song “Rage” for streaming three days prior. 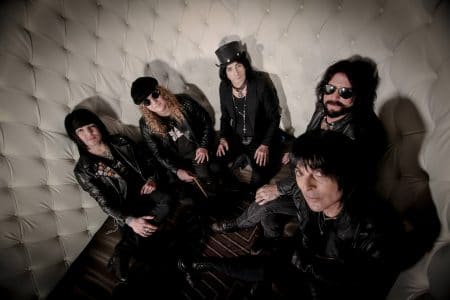 “Was there any doubt? Not only did L.A. Guns take the Sleaze Roxx readers’ #1 spot, they more than doubled the amount of votes of the nearest challenger with a total of 790 points. Never in the history of the Sleaze Roxx Readers’ Top 20 Albums yearly polls has a band dominated so much to take the top spot. To put things into perspective, in 2016, Metallica grabbed the top spot with 430 points while in 2015, Def Leppard took the honours with 455 points. Only Ratt‘s Infestation in 2010 has ever obtained more points (817) than L.A. Guns‘ total for 2017.

Funny enough, most of the criticism that I received this year for the Sleaze Roxx’s Top Ten Albums of 2017 stemmed from L.A. Guns‘ exclusion from that year-end list. I can only conclude that the Sleaze Roxx readers have responded in a strong way [laughs]! In any case, it’s no surprise to see L.A. Guns’The Missing Peace as the Sleaze Roxx readers’ choice for the top album of 2017. The chemistry between singer Phil Lewis and guitarist Tracii Guns is undeniable. Add arguably the “best” parts of each musician’s previous band — the solid rhythm section of bassist Johnny Martin and drummer Shane Fitzgibbon from Tracii Guns‘ band and ace guitarist Michael Grant from Lewis‘ previous L.A. Guns incarnation — and you have arguably the best L.A. Guns studio album since Cocked & Loaded and the sleaze rockers’ best finish by far on a Sleaze Roxx year end list.”