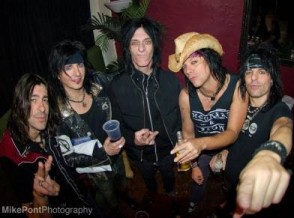 The band are currently in pre-production and expect to start tracking in early February with legendary producer, and old friend, Andy Johns (Led Zeppelin, Rolling Stones, Cinderella, Van Halen and Chickenfoot, as well as the last three L.A. Guns albums). A CD and vinyl release, as well as bonus tracks available only on iTunes, is set for early summer. A nine-month World Tour following the release is also currently being put together.

Singer Phil Lewis is said to be thrilled to get back in the studio and finally get a chance to record once again with Andy. “We’ve been waiting a long time to get back in and record. Our last album, ‘Tales From The Strip’, was incredibly well-received and we’re looking forward to putting out something even better! With today’s uncertain musical landscape it’s great to have a label like Cleopatra Records behind us. We’ve been friends with Brian Perera (Cleopatra Records owner and founder) for a long time, and are really looking forward to working together on this and many more projects with him in the future.”