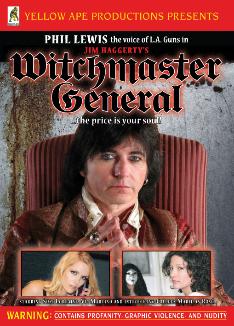 Yellow Ape Productions have released the final artwork for the posters and DVD covers of JIM HAGGERTY’S WITCHMASTER GENERAL, the much-anticipated debut of L.A. Guns lead singer Phil Lewis. The artwork can be found at the official Yellow Ape website www.yellowape.net along with more information on the film. The artwork features Phil – the voice of L.A. Guns – as well as gorgeous scream queen Suzi Lorraine and Playboy Playmate Colleen Marie (who also makes her film debut here).

Yellow Ape Productions have announced JIM HAGGERTY’S WITCHMASTER GENERAL will be released April 20 at a gala premiere at the Bellmore Theater in Long Island, New York – the night after L.A. Guns rock Long Island playing their classic album ‘Cocked and Loaded’ in it’s entirety at the Crazy Donkey in Farmingdale. Phil and many of the cast will be in attendance to see this exciting new movie in its big screen debut.

You can check out the trailer for this new masterpiece at this location www.youtube.com/watch?v=tWeIqfxqk10

The premiere will take place at the Bellmore Movies at 222 Pettit Avenue in Bellmore , NY at 8PM and is open to the public. Admission is $10. The film is unrated, but does contain profanity, graphic violence, and nudity, so no one under 17 will be admitted. An after-party will take place at Willie McBride’s one block away at 101 Bedford Avenue in Bellmore , NY . There will be free food, drink specials, and karaoke.

Free admission to the after party with your ticket stub!