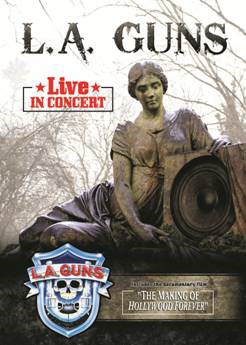 A mere month after being named L.A. Guns guitarist, Frankie Wilsey has been replaced by EndeverafteR’s Michael Grant. The former EndeverafteR frontman, who had minor success with the singles “I Wanna Be Your Man” and “Baby Baby Baby” in 2007, will make his live debut with the sleaze legends tonight in Illinois.

Said Grant, “It’s official! I’m the new lead guitarist for L.A. Guns and we will be touring through Illinois and Michigan starting this Thursday. Check out www.laguns.net for tour dates, tickets and catch me if you can.” L.A. Guns bassist Scotty Griffin added, “Michael Grant from EndeverafteR will be our guitarist starting this weekend in Chicago and Detroit. Is he our permanent guitarist? What happened to the last guitarist? Who’s solo album is better, Paul’s or Ace’s? I can’t say… I’m just the bass player. But you heard it here first. Stay tuned…”

Wilsey, best known for his work with Sea Hags and Stephen Pearcy/Arcade, replaced Stacey Blades in L.A. Guns when the guitarist and band parted ways due to “extenuating circumstances and musical differences.” At the time Blades said, “”This isn’t an easy announcement but as of this month I will no longer be playing guitar for L.A. Guns,” said Blades at the time. “I dearly wish Phil, Scotty and Steve much continued success. It’s been a crazy ten year ride filled with some amazing tours, albums and memories to last a lifetime! Due to extenuating circumstances and musical differences I have decided not to continue with the band. L.A. Guns was a dream come true but life is full of new beginnings and journeys. I will be taking some time off and have some different things lined up that I will share with you in the near future.”

Meanwhile, L.A. Guns will be releasing a DVD/CD package called ‘Live In Concert’ on February 12th by Cleopatra Records. L.A. Guns provided one of the most talked-about performances at the 2012 M3 Rock Festival in Maryland last May. That full concert was professionally captured in a multi-camera shoot and packaged with behind-the-scenes, studio, and interview extras in ‘L.A. Guns: Live In Concert’. Also included are three studio music videos from the critically-acclaimed album, ‘Hollywood Forever’. The accompanying CD provides the audio tracks for the M3 concert.

L.A. Guns continues carry the torch of the glam/sleaze/rock scene from the Sunset Strip, always delivering their trademark sound, but also creatively moving forward with the type of exciting new music displayed in ‘Hollywood Forever’. It is this combination of old and new that keeps L.A. Guns on the road, on the radio, and on the minds of rock fans across the globe. ‘L.A. Guns: Live In Concert’ captures the band at one of the biggest rock festivals in the U.S. and showcases the fan favorites like “Never Enough” and “The Ballad of Jayne” as well as tracks from the new record. The concert is uncut and has material not seen in the live festival feed.