You’ve got to hand it to L.A. Guns who have made the most of a bad situation. The sleaze veteran rockers were scheduled to headline the last night of the three day Hull Metal Heaven Festival at The Welly Club in Hull, UK on September 16, 2018 but given that the festival organizers pulled the plug on the festival only eight days prior to its start, L.A. Guns along with many 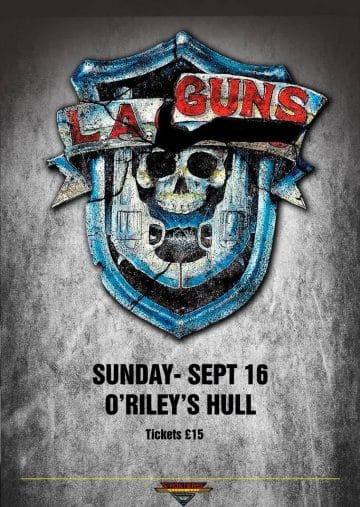 other bands were left in the lurch without a gig to play or even worse, having to cancel entire tours centred around the festival dates. For example, Pretty Boy Floyd had to cancel their three other UK shows and one Hungary tour dates given that presumably their flights to and from the UK were to be covered by the Hull Metal Heaven Festival.

L.A. Guns have announced via their Facebook page that they will be playing at O’Riley’s Live Music Venue in Hull, UK on September 16, 2018 along with Dust Bowl Jokies and Sykko Dollz with apparently more bands to be added. Tickets for the gig can be purchased at Skiddle.

Sleaze Roxx recently caught L.A. Guns performing live at The Rockpile in Toronto, Ontario, Canada in mid-July 2018 and stated in its review: “Phil Lewis‘ voice has held up very well over the years and he was playful and smiling the entire night. He recalled how great L.A. Guns‘ last show at The Rockpile was back in April 2017 and noted that it was also on a Monday. If I remember correctly, the place was packed on this night. There seemed to be a few less people attending this time around but there was still a sizeable and enthusiastic crowd for a Monday night. Lewis advised The Rockpile crowd that “Mondays” would be their thing from now on! Lewis also pointed out that the band members had been treated like princes from day one since coming to The Rockpile (the west location as L.A. Guns previously played the Rockpile East in June 2014 before it closed down). As usual, L.A. Guns put on a spirited set from start to finish. Guns and Lewis were all smiles at each other and it’s really great to have those two share the same stage again. Lewis announced that the band was working on a follow up album to The Missing Piece, which can only be described as absolutely fantastic news! “