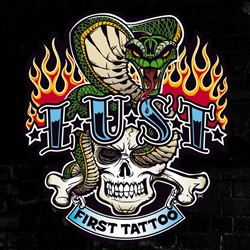 Australian rockers L.U.S.T. and Sleaze Roxx have teamed up to bring you “Gimme A Fix”, from the band’s debut album ‘First Tattoo’. The new CD is available directly from L.U.S.T.’s website at www.thebandlust.com, alongside MP3 downloads of the album, shirts and stickers.

Distributed by MGM, any store will be able to order ‘First Tattoo’ in, although most JB HiFi’s should already have it in stock. It will also soon be available on iTunes.

‘First Tattoo’ was produced and recorded with Peter Northcote in Sydney, Australia, then mixed in the US by Ulrich Wild (White Zombie, Pantera, Dethklok, etc). The album includes ten tracks of raw mayhem, which the band worked themelves mental putting together. Says L.U.S.T. about the new CD, “We couldn’t be more excited and proud to finally be able to share it with you all.”