Aussie glam rockers Laced In Lust will be taking a break and going on an undefined hiatus after their two last scheduled gigs at the Enigma Bar on June 16, 2018 and Fowlers Live (supporting Hardcore Superstar) on June 17, 2018 in Adelaide, Australia.

The following message was posted in part on Laced In Lust frontman Torsten Steel‘s Facebook page on May 5, 2018 (with slight edit): 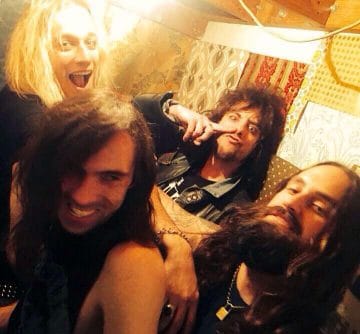 “After many years of rocking, countless tours and shows near and far Laced in Lust have decided to have a break.

We dont know what the future holds for us. We may be back we may not, but where going out with a huge party.

And only one other band the party pirate masters Lagerstein can help us do it.

Tickets can be found at www.lagerstein.com

To help melt your face this nice will be skyhammer and sudden state.

Thank you everyone for your on going support through the years. It has meant alot to all of us and will not be forgotten. We hope to see you around the traps still.

Rock on, party on and rest in sleaze.

“Thank you and good fucking night”

Laced In Lust describe themselves as follows on their website: “Blending high energy rock n roll with a determind attitude, Laced In Lust takes the best of the rock powers from the ’60s, ’70s and ’80s and mixes it with a more modern sound. Laced In Lust has been turning heads since their first show in 2012 and have a strong following in Adelaide that continues to grow.

Since that first show you’ve seen the release of debut single “Fire” followed by numerous national tours throughout Australia, the booming release of their EP “Firing Lines” AND more recently returning from a European tour! Its been full steam ahead from day 1 and nothing is holding back your new favourite band, Laced In Lust!”