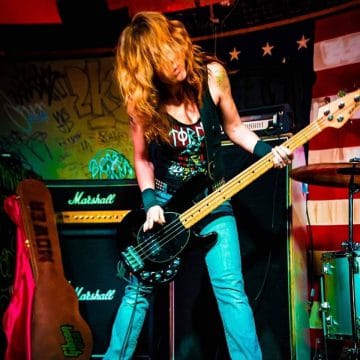 Big news in the Lady Beast camp as long-time bassist Greg Colaizzi has parted ways with the band and has been replaced by Amy Bianco. Colaizzi played on all of Lady Beast’s releases consisting off Lady Beast (2012), Lady Beast II (2015), Metal Immortal EP (2016), Vicious Breed (2018), The Early Collection (2019) and The Vulture’s Amulet (2020).

“The new album also marks a transitional time for the rhythm section of Lady Beast. After a decade of holding down the low end and helping with song arrangements, touring, and releasing some albums on his label, Greg Colaizzi is parting ways with the band. We are sad to see him go, but wish him the best and continued success with his other project, Möwer.

We are excited to announce that Amy Bianco will be joining the band on the 4 string motherfucker! Amy has been a fixture in the Pittsburgh metal and heavy music scene for 20+ years (you may have seen her perform with Molasses Barge, Motorpsychos, Lycosa, Reducer, and others). Deb actually worked with Amy on a cover project (doing Twisted Sister songs) for a charity event a few years back. Amy’s enthusiasm is breathing new life into the older material, and she’s ripping through the new tracks. In addition to being a killer bassist, she is bringing some ideas for vocal harmonies. We are beyond excited to get back on stage with her doing what love soon!”

Lady Beast‘s new album is available for purchase via the group’s Bandcamp page.

Lady Beast‘s “The Gift” single (from The Vulture’s Amulet album):