Pittsburgh, Pennsylvania, USA based Lady Beast have released one new song entitled “The Devil’s Due” from their new upcoming EP Metal Immortal, which will be released in October 2016. 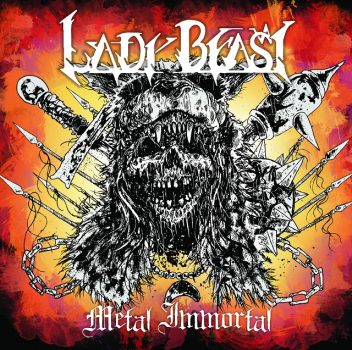 Metal Immortal can be preordered on vinyl at Lady Beast‘s website and eventually on CD via Inferno Records.

Back in May 2016, Sleaze Roxx had the opportunity to catch Lady Beast playing live in Toronto, Ontario, Canada where the heavy metal rockers played three of their new songs off their upcoming four-song EP Metal Immortal. Sleaze Roxx stated the following in its concert review of Lady Beast‘s gig: “Now, I am not a big fan of bands playing unreleased new songs at gigs, especially when I don’t get to see them play live very often and the group is limited to only seven songs such as Lady Beast on this night but I got to say that the trio of unreleased new songs played by Lady Beast has me very excited for the release of their four-song EP (hopefully sooner rather than later). I had heard “Devil’s Due” — the first of three new tracks – before when Lady Beast’s entire set from a past gig was posted on YouTube. It’s hard to remember at this point exactly how each of the three new songs – “The Ripper” (just a working title), “Devil’s Due” and “Lady Of The Battle” – sounded aside that they all rocked, had some awesome guitar parts and solos, and I can’t wait to hear the completed EP.”

Lady Beast‘s “The Devil’s Due” song: