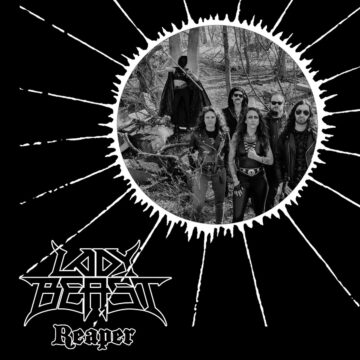 In an interview with Sleaze Roxx back in April 2015, Levine was asked to provide one highlight and one disappointment during her time in Lady Beast. The singer replied:

“I would say… honestly, we got to play a couple of sets last year in Chicago — one was called Alehorn and another was called Ragnarokk. It was the first time that we’ve actually played in front of a couple hundred people. That was a super big highlight for us, just being exclusively at a trade metal set where everyone loves metal and collects vinyl, which is what we majorly deal with. And it was just like the energy and the passion was totally there so that was really awesome!

There haven’t been that many disappointments. I guess disappointments are kind of like, “Oh, you know when people”… I’m trying to think. Our lead guitar player, that was on this record, decided to leave the band a couple months ago so he actually played the release show with us and that was his last show. So, we’ve been training our new guitar player Steven Lauck. He was actually the first original guitar player and he happened to come back — it was perfect timing. But you know, disappointments kind of come with life — you know what I mean? I don’t mean like anything really specific per say, but random things like being broke — you know, because of the band, or just random things like that.”