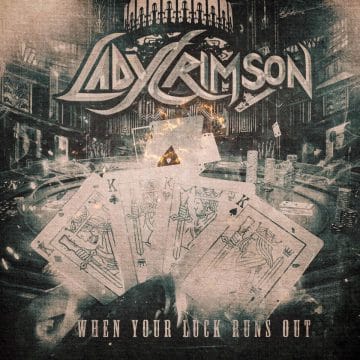 Starting 2020 off with a bang, “When Your Luck Runs Out” is the first single of the decade for Lady Crimson. Self-recorded, mixed & mastered in Launceston, Tasmania, the track sets its sights on the rich, whilst showcasing some of Lady Crimson‘s heaviest riffs to date, blazing guitars, thumping drums, and branches out into some new lyrical content for the band. With a hint of southern groove, “When Your Luck Runs Out” is a headbangers heaven, worth checking out right NOW! Follow the Spotify link below or check it out on all your favourite digital platforms??????

You can listen to Lady Crimson‘s new single “When Your Luck Runs Out” via Spotify.

Sleaze Roxx stated the following in its review of Lady Crimson‘s 2014 album Live Against The Grain!: “Lady Crimson are definitely rough around the edges, as this Australian band is obviously more concerned with creating music than fiddling with a computer to achieve crystal clear production. That is partly what makes Live Against The Grain! such an ’80s throwback, both in sound and feel — and may also explain the album’s moniker. Just like Ratt circa 1983, Lady Crimson power forward with killer riffs and a unique and unconventional frontman. While the album as a whole isn’t a Ratt rip-off, the similarities between the two are very pronounced during “Take Me Screaming” — especially thanks to the crunchy guitars.”