Knight advised yesterday that he made another attempt to have an original Bang Tango reunion at the Whisky A Go Go [in West Hollywood, California, USA] in October 2018 but it failed because the venue did not want him to open for Bang Tango and have to pre-sell tickets like other opening acts. 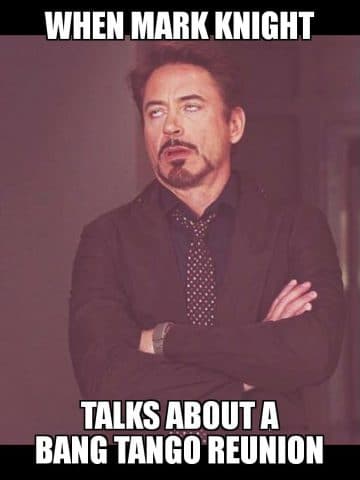 “I know the actual conversations that took place. MK is a whiny bitch”

“There is no huge outcry of fans that are petitioning for a bang tango reunion. Hahah. Tell him to stop. He doesn’t even have that sound anymore. Listen to his “albums” … If you can get through a song.”

Back in April 2016, Eric stated the following in an interview to Sleaze Roxx in that regard: “I’m not threatened one bit. Joe [Lesté] is my best friend and he’s one of the most loyal people I know. All those guys quit in the ’90s. Joe didn’t. Why would he dump the guys that have been with him for so long through so much? We are family. I’ve been with Joe for over 11 years. I handle pretty much all the band’s business so without patting myself on the back, you would probably have to hire three people to do everything I do [laughs]. Timmy Russell has been in the band for over 10 years. Rowan has been in the band over two years. We travel in close quarters on the road. We don’t fight. We have mutual respect for each other as people and musicians. No drama with us as well. Joe finally has the perfect line-up. I’ve met Tigg and he’s an awesome guy. I’ve met Mark and he came up and did a couple songs with us at the Whisky A Go Go and it was awesome. I have yet to meet Kyle Kyle or Mark Stevens. 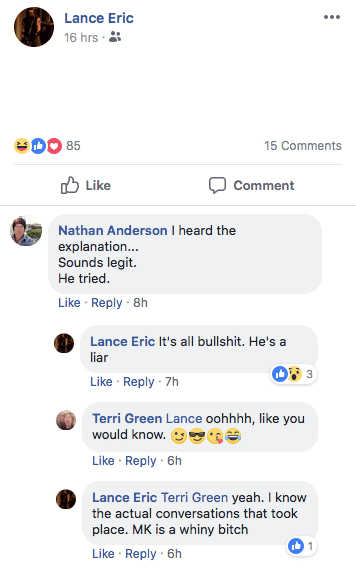 I guess the current issue with me is that Mark was asked to come up and perform with Bang Tango at Rocklahoma in May. Since I handle the business, Mark contacted me three months out and asked to square away the songs and what he was getting paid. A band at our level usually doesn’t have all the contract details that far out and I told him that. Now we are still two months out and he asked me again to lock down a contract with him as to what his payment was going to be. I guess in Joe’s and his conversation, Joe revealed what our guarantee for Rocklahoma was and Mark seemed to think he was getting an equal share. Well it doesn’t work that way. We are doing five other shows around Rocklahoma and what the band takes home is figured out after all the band’s bills are paid which includes rentals, fuel, flights, etc. I asked him if he wanted to do the club dates with us and he stated “No” and that he was just doing Rocklahoma. That’s the easy show isn’t it [laughs]? After being hounded a couple more times about money I blew him off. Talked to Joe and we moved onto planning without him.

Honestly, we are playing on Rob Zombie night so I don’t think too many people would even know who Bang Tango is, let alone care if the original guitarist was sitting in. Then Mark goes on social media and not only insults the current line-up but insults the rest of the original guys saying they can’t get their shit together. They got their shit together and put together ReDUX… See how long that lasted and sounded? He said that he pulled out of Rocklahoma because he didn’t feel right about performing without the original guys. Since I was the one who he was dealing with, I felt compelled to let his fans know the real reason why he backed out — all about the money. He acts like he’s in it for the best interest of Bang Tango. Then he would have done it for any price. He was going to have his flights paid for, his hotel paid for and a flat fee to be determined. All of these conversations were snapshot and shown on his social media page as well as mine. I guess he didn’t like being called out for being a liar. I didn’t have any hard feelings about him backing out for any reason. If it’s money I understand. We all have a self worth.” 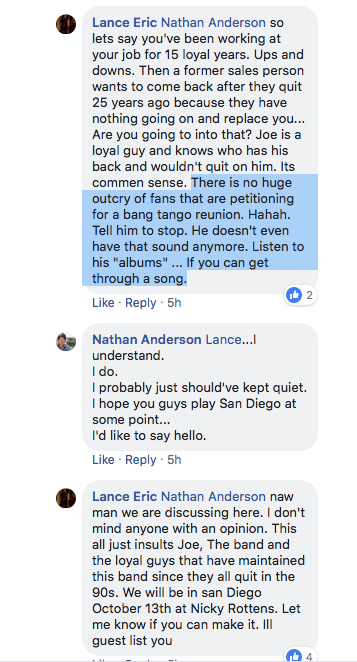