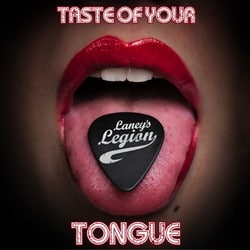 Chris Laney’s new band Laney’s Legion has released a digital single entitled “Taste Of Your Tongue” through iTunes, Spotify and Amazon. The first single of the album is a killer fist-in-the-air, sexy track, with artwork to match!

The band’s self-titled full-length debut CD will be released worldwide on April 22nd.

Chris Laney has made a name for himself in the hard rock world writing, producing, mixing and winning Grammy awards with bands like Candlemass, Dynazty, Europe and H.E.A.T. After two successful and critically acclaimed solo albums, ‘Pure’ (2009) and ‘Only Come Out At Night’ (2010), he’s now back with a new album. But instead of returning with a third solo album, the forthcoming full-length feature will be the debut album for his new band: Laney’s Legion.

“I really missed the feeling of having a real band. I wanted to go back to the basics,” says Laney, who handles lead vocals and rhythm guitars. Joining him is drummer Patrik Jansson (Hellsingland Underground) and bass player Mats Vassfjord (Grand Design, Scaar). They are both sought-after session players in the Swedish music circuit, and toured with Laney on his last tours. Last but least, the brand new quartet is complete with the highly acclaimed guitar virtuoso Rob Marcello (Danger Danger).

This time, it’s all about the music: “My solo albums were pretty much recorded and written in a rush. This time I didn’t wanna stress anything. This time I only wanted the best songs possible,” continued Laney. In order to achieve this, he brought in longtime partner Anders Ringman to help out with writing and producing. The multi platinum songwriting duo, aka Platform, has a 15 year collaboration history featuring work with Crashdiet, Crucified Barbara, Steevi Jaimz and others.

“It was the natural choice. We work so well together,” Laney says. And with contributions from everybody in the band, Laney’s Legion have produced an album containing nothing but solid, melodic sing-along tunes. “We’re not trying to reinvent the wheel here. What it all come downs to is the music. And there are surprises. We’re not just doing the normal hard glam rock our fans might expect — we rock, we pop and no one can stop us now!”