Jimmy Kay and Alan Dixon from Canada’s The Metal Voice recently interviewed producer Chris Tsangarides (via video below) who has produced some of the best known metal albums such as Judas Priest‘s Painkiller (1990) and Anvil‘s Metal On Metal (1982).

Tsangarides was asked if Anvil‘s classic album Metal On Metal influenced the whole speed metal genre to which he replied: “At the time, you really don’t know. You haven’t got a clue. It’s only when you can look back and think, you know what that was the first record that did that. Metal On Metal did have a big influence on people cause there wasn’t much of it going on. But then as you see in the Anvil movie, artists being interviewed about Anvil and giving their honest opinions and coming out [saying] with we used to play their albums. I know that Lars Ulrich [Metallica] had gone into Johnny Z‘s office with a copy of Metal On Metal and said “That’s who we want to produce our album with” and Johnny Z said “No.” He said “It would be too expensive.” I was like what no one asked me? Who knows what it could have been if I produced Metallica‘s Kill ‘Em All [debut album]. Would it have come out the same way? I’m sure it would have not come out like that.”

In terms of producing Judas Priest‘s Painkiller album, Tsangarides stated: “It was [a] bloody marvelous nine weeks we were there I don’t remember a single argument…. In the song “Painkiller” where Rob Halford is singing ‘Pain, Pain, Killer, Killer’ getting all intense, the production note to Rob was, ‘Can you sound like a Dalek from the Dr Who Series?’ Rob Halford left after Painkiller. He wanted to go down the Pantera route. He said we should sound more like Pantera and I would say they are trying to sound more like you. That’s what happens with artists. They listen to some new fresh band and they want be them. You don’t want to be Judas Priest sings Pantera. Be yourself.”

Wikipedia states the following in part about Tsangarides (with slight edits):

“During the 80s and up to the 90s, Tsangarides became famous on the hard rock and heavy metal scene for the quality of his job and for having produced signature albums, like Anvil‘s Metal On Metal in 1982, Thin Lizzy‘s acclaimed final studio release Thunder And Lightning in 1983 and the Grammy nominated Painkiller by Judas Priest in 1990. He worked in those years with Black Sabbath, Ozzy Osbourne, Helloween, Y&T, Tygers Of Pan Tang, Anthem, Sinner, King Diamond, Ian Gillan and produced also Bruce Dickinson‘s first solo album Tattooed Millionaire (1990). 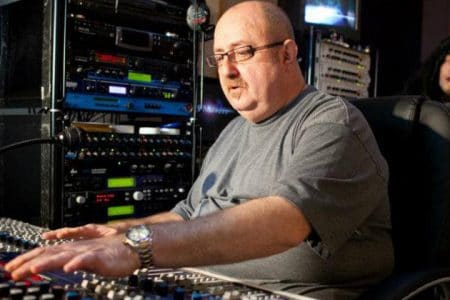 Beside his work with metal bands, Tsangarides recorded songs for artists of other musical genres, like singer/songwriter Joan Armatrading, pop star Tom Jones, goth rockers The Lords Of The New Church, Killing Joke and keyboardist Jan Hammer. In 1987, he remixed the song “Never Let Me Down Again” by synthpop band Depeche Mode for a release as single.

The 90s saw Tsangarides still at work with metal bands like Exodus, Overkill, Judas Priest again with the album Painkiller, the Japanese Loudness and guitar virtuoso Yngwie Malmsteen, but he also produced the British gothic rock act The Sisters of Mercy and the alternative rock groups The Tragically Hip and Concrete Blonde. For the latter band, he also produced and engineered the hit single “Joey” in 1990. In 1999, Tsangarides collaborated as a performer and songwriter with Shin Hae-chul in the techno/metal act Monocrom. They made one album and did an arena tour in Shin‘s native Korea.

At the beginning of the 2000s, Tsangarides had his own music company called Rainmaker Music, which included a recording studio with the same name in South London. He later opened another studio called The Dump in Kenley, Surrey, which operated until January 2006. Among others, New Model Army, Leanne Harte, Winters Bane and Glyder recorded there.

In 2006, Tsangarides opened a new recording facility, Ecology Room Studios in Kent, England, where he went on producing new and established acts on lower budgets than in corporate studios. The Strawbs, Mountain, Steeleye Span, The Quireboys, Biomechanical, Spit Like This, Savage Messiah and many other bands recorded at his new facility. LunarMile, whose members include Toni-Marie Iommi (daughter of Black Sabbath‘s Tony Iommi) and Alex Hill (son of Judas Priest‘s Ian Hill), recorded there in June 2007.

Tsangarides is featured in Sacha Gervasi‘s documentary film Anvil! The Story of Anvil, released in 2009, while at work on the album This Is Thirteen, which Anvil recorded at Ecology Room Studios.”