Metallica drummer Lars Ulrich had the great honor of doing the induction speech for Deep Purple entering the Rock and Roll Hall of Fame yesterday night. 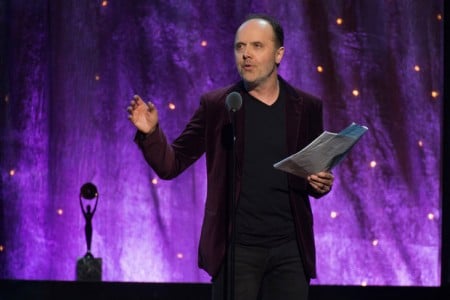 Ulrich‘s induction speech was posted on Metallica‘s website and is as follows:

This night is the culmination of two musical journeys. One is mine. The other is that of the band that changed my life… and rock and roll.

When I was 9 years old, my dad took me to see Deep Purple in Copenhagen, Denmark on a dark, cold Saturday night in February 1973. Everything was larger than life: the sound, the spectacle, the songs, the musicians, all doing things with their instruments that I had never seen before and didn’t know were even possible. Deep Purple were a beautiful contradiction, like you had just walked in on 5 musicians at the top of their game, jamming one classic after another with raw intensity – as if they were in a garage playing for no one but themselves, yet at the same time projecting a 1000-yard stare deep into the bowels of the arena.

Let me break this down for ya…

Singer Ian Gillan, center stage, a magnet for the eyes, personifying every trait of epic frontman coolness, screaming his lungs out and reaching notes so high I’m sure he was breaking glass all over town.

Behind him, on drums, little Ian Paice, a rock n roll cocktail of hair, sweat, spit and precision, somehow managing to wipe the steam off his glasses as he pressed this freight-train forward…and doing it in 8-inch platform heels!

At stage right, the regal Jon Lord…. I had never seen anyone get so physical with his organ – but, hey, I was only nine! He did things with the Hammond C3 that no one had ever done before, firing the results through a wall of Marshall amps and Leslie speakers, uniquely heavy-ing up the sound into uncharted territory. Let me emphasize this: Jon Lord was the first to truly amplify and distort the Hammond organ. Sadly, we lost him in 2012.

Bassist Roger Glover, cowboy hat, paisley shirt, next level smoothness, the one keeping it grounded, groovy and dare I say, sexy. His egoless stage presence supported the crossfire energies of his bandmates, disguising a firm vitality as both songwriter and co-producer of their biggest records. 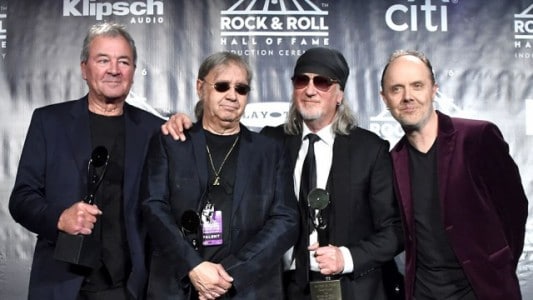 And then there was… Ritchie fucking Blackmore. What he did with a guitar did not seem feasible. He played it straight, he played it sideways, upside down and all around, his fingers, hands and arms in a constant ballet of movement and unpredictable motion. The sounds, the screeches, the pick slides…grinding it against the speakers, playing it with his ass, his boots, throwing it in the air, all the time projecting a peculiar mix of showmanship, control and aloofness. It was like Blackmore was showing off, but mostly for himself, hovering on the edge of electric narcissism. At the same time he was so beyond cool. It was impossible to look away.

These guys could play. They could improvise. They were in a constant, and curious cutthroat competition with each other to take the music some place new, some place unknown, and never, ever, the same place twice.

Fast forward 12 hours later, to the local mom and pop record store where I requested anything and everything by Deep Purple and was promptly handed the Fireball album. My life had officially changed – forever.

With almost no exceptions, every hard-rock band of the last 40 years, including mine, traces its lineage back directly to Black Sabbath, Led Zeppelin and Deep Purple. And as far as I’m concerned, these three bands should always be considered equals for their songwriting, their recordings and their accomplishments. Where I grew up, and in the rest of the world outside of North America, all were equal in stature and influence… So in my heart, and I know I speak for many of my fellow musicians and millions of Purple fans when I confess, that I am somewhat bewildered that they are so late in getting into the Rock & Roll Hall of Fame – decades after the mighty Sabbath and the brilliant Zeppelin. This is of course no disrespect to those great bands or the Rock Hall…I just have to make clear that Deep Purple are AS revered everywhere ELSE in the world.

Deep Purple became big the old fashioned way: they worked. HARD. Constant touring; making an album a year, sometimes two; never giving a shit about “image” or critical acclaim. And in the golden age of rock & roll debauchery, they were known primarily for their music…in the sex and drug sense, they were, reportedly, gentlemen through and through (cough). In fact, if you must dig, the main dirt on Purple was the revolving door of personnel: 10 different band members in the first seven years, 14 in total.

Let me of course give a well-deserved shout out to everyone who has played a part in this story, including the other three inductees tonight. I saw two of them in their live debuts when Deep Purple came back to Copenhagen in December 1973. Singer David Coverdale, who blew me away with his unique bluesy pipes and quirky mike stand. And bassist Glenn Hughes, white satin suit and way-cool rocker hair to go with his R&B-influenced vocals. And not last, but actually first, original singer Rod Evans, who was the voice of the formative Purple in the late ’60s, and on their first hit single “Hush.” 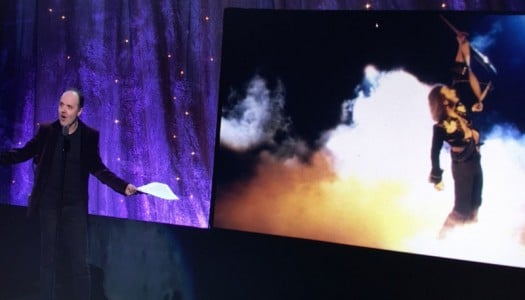 So from the 8 inductees tonight, to the 14 members who have played in this band, it’s obvious that great music often comes from tension… and what great music it is!!!

The albums, just to name a few: The Book of Taliesvn, In Rock, Fireball, Machine Head, Burn, Stormbringer.

And with phenomenal songs, just to name a few: “Wring That Neck,” “Black Night,” “Speed King,” “Child in Time,” “Strange Kind Of Woman,” “Highway Star,” “The Woman From Tokyo,” “Mistreated.”

You know, one total mindfuck is the difference between the studio and the live versions. Take Space Truckin’. On Machine Head it clocks in at just over 4 minutes. On the legendary album Made In Japan, it’s almost TWENTY minutes long!!! The solos, the jamming, the impulsive force in every Deep Purple performance, are the reasons Wikipedia lists 42 official live albums. Because they were that good, that different, and that inspired every night. And still are.

BUT WAIT!…there’s one more song, right? The one everybody knows about Frank Zappa and a burning casino on a Swiss lake, and fires up in the sky or something, the one featuring perhaps the most classic guitar riff of all time, the first thing anybody learns on a guitar, the riff that has actually been banned from being played in music stores to preserve the sanity of the staff. It is a riff even I, the most illiterate guitar player on Planet Earth, can actually play.

You know the title: “Smoke on the Water.” It’s the signature hit and the biggest single. And so huge that Deep Purple may have been mistaken for a “one-hit wonder”. But if that’s all you know, even to this day, think of it as a big, heavy door into a legacy without end – one that remains as vital as ever in its latest incarnation, touring ’round the world, blowing minds and still changing lives.

There is a picture on the nightstand next to my bed, given to me long ago by my buddy Frank. It is a photo of Deep Purple – with my face photoshopped on top of Ian Paice…sorry Ian! That’s how much Deep Purple still means to me, to the fans here tonight, and to the millions of followers around the world, who look upon Deep Purple as:

They should have been here long ago. They are now here, where they belong.

I’ve always wanted to say this: Ladies and gentlemen, please welcome to the stage… and to the Rock and Roll Hall of Fame: