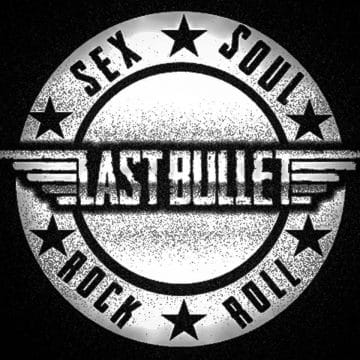 has announced its 17 Emerging Canadian Artists to watch for in 2017 and two of them — Last Bullet and Fallen Heirs — have been featured on Sleaze Roxx in the past.

Last Bullet got started on October 1, 2009. They have released two EPs, Last Bullet in 2011 and Love.Lust.Illusion in 2012, as well as two singles “Sin” in November 2015 and “Southern Lips” in October 2016. Sleaze Roxx interviewed Last Bullet‘s frontman Bryan Fontez on two occasions — first in April 2013 and the second time in January 2015.

During one concert review in early 2015, Sleaze Roxx declared Last Bullet as “The Best Live Act in Toronto” and stated: “I don’t know how many present at The Hub were really familiar with Last Bullet prior to their performance, as I got the feeling that the crowd consisted more of “locals” than actual fans who had travelled a bit of a distance such as myself. The fact that the band seemed to be selling a lot of their CDs after the show seemed to validate my impression. Julius Caesar’s famous 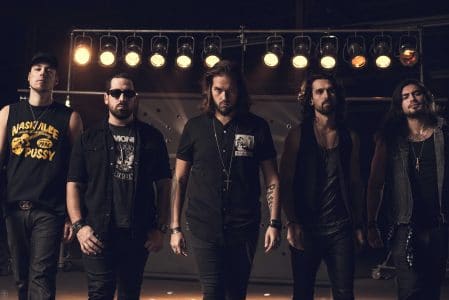 adage of “veni, vidi, vici” seemed most fitting for this occasion — Last Bullet came, saw and conquered the crowd in impressive fashion. I have no doubt that all those who left The Hub on this night were, or had become, Last Bullet fans. There are many great live bands that emanate from the Toronto area, and not to take anything away from any of them, but I think out of the ones I have witnessed to date Last Bullet are the best. To close, I am going to borrow the eloquent and succinct words from my friend Eduardo and state that Last Bullet‘s live performance at The Hub left me, “super-impressed”.”

Canadian Beats stated the following about Last Bullet: “Last Bullet is another hard-rocking band from Toronto that we love. These fellows are a staple in the very hot Toronto music scene and have had some recent successes getting their name out there to the larger market. This is partly in thanks to sharing the stage with A Rebel Few and Sebastian Bach of Skid Row this past November in London, ON. Enjoy the official video for, “Sin” that is bound to make waves in 2017!” 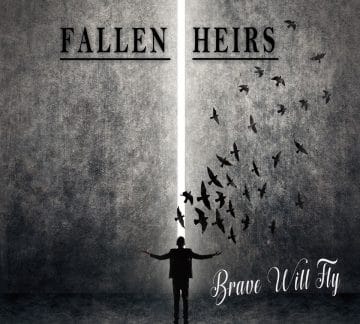 Fallen Heirs formed in 2011 and have released two EPs — Fallen Heirs in 2013 and Eyes Wide Open in 2015. The group just released a new single entitled “Brave Will Fly” and will be releasing a video for the song very shortly.

Sleaze Roxx stated the following in its concert review when Fallen Heirs were one of the opening acts for Lita Ford on August 9, 2015 in Toronto, Ontario, Canada: “As soon as I heard [Tim] Shaw sing, all I could think was how much I love this guy’s voice. I am not sure why but to my ears, it does not get much better than hearing Shaw sing. Unfortunately for Fallen Heirs, the sound emanating from Philly Dee‘s bass sounded a tad off and/or too loud which kind of hurt the overall sound of the band. Fallen Heirs mostly tore through songs that I was not familiar with (Sayne was kind enough to provide the band’s setlist after the show) but the two that they played from their self-titled EP — “Lead Us To Water” and 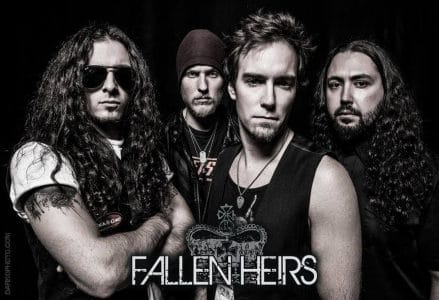 “Wake Up” — I really enjoyed. I also really liked their last song “Burn” that closed off their unfortunately too short set. The good news is that the band announced that they were putting the finishing touches on their next album but I can’t remember at this point whether the band was planning on releasing it in late 2015 or early 2016. Whatever the case, Fallen Heirs are proof that winning fans over the old fashioned way — i.e. through a band’s live performance — is an art that I suspect that they are very good at.”

Canadian Beats stated the following about Fallen Heirs: “We were first introduced to this hard rocking Toronto band at the infamous last concert for Scott Weiland before his untimely death, ironically alongside the above-mentioned, The Road Heavy. These boys know how to put on a rock show! They recently toured with Buckcherry in the fall and their new acoustic single, “Brave Will Fly” was recently released on all digital platforms. Fans should stay tuned for the release of the song’s new music video and a promise from the band of heading out on the road soon!”