Canadian hard rockers Last Bullet have released a lyric video for their new single “Gimme Time” from their new EP 80-69-64, which was just released last month. 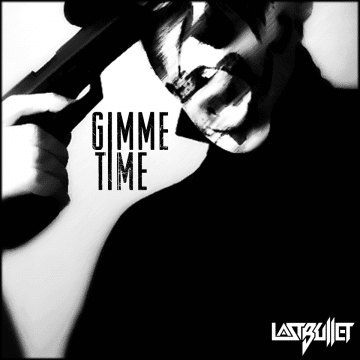 Sleaze Roxx stated the following in its review of the EP 80-69-64 and in particular the song “Gimme Time”: “Rather than the catchy melodies and witty lyrics that were so prevalent on the first self-titled EP or the heavier AC/DC like (at times) rhythm filled tunes on the band’s sophomore EP Love.Lust.Illusion, Last Bullet have decided to channel more ’90s era slower styled music. Gone are the great melodies and mesmerizing but simple guitar riffs, and in are slower plodding type songs with melancholic modern sounding guitars and a real lack of melodies….

What about the three songs that should not have made the cut? “Bright Lights” starts off promising building up slowly but the crescendo portion when the chorus hits is just too slow paced and the song never really picks up from there. If I was at a concert, this would be a song that I would consider going for a bathroom break. Had “Bright Lights” been sped up at the appropriate portions of the song, it could have been so much better and worthy of being on the album. “Smoke & Ashes” is just a dull track from start to finish. It’s another song that could have benefited from being sped up quite a bit but rather it plods along seemingly aimlessly. This takes me to “Gimme All.” This was the only track that I had not heard in a live setting. Funny enough, [singer Bryan] Fontez advised me the last time that I saw Last Bullet live that I would not like the song. He couldn’t be more right. This song is a marked departure for Last Bullet who are obviously trying to appeal to a completely different music market with such a track. Another slow plodder with a lack of melodies and not whole lot going on in the song. Funny enough, I like it more than “Smoke & Ashes” which isn’t saying much. And what the hell happened to guitar hero Brendan Armstrong? It appears that he’s pretty much on hiatus on 80-69-64.”

Our new album “80-69-64″ is available now on LastBulletMusic.com and all online streaming sites and platforms.”Gimme Time” written and performed by Last Bull…