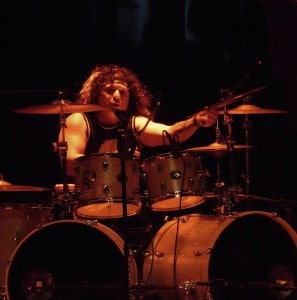 Only three days after announcing that their drummer Chuck Tipton had departed and that they were looking for a new drummer, North Carolina sleaze rockers have already announced that they have a new drummer by the name of Dee Williams.

Last Call Messiahs are proud to announce the addition of drummer Dee Williams (Nighttrain, Kings of Hollywood) to their lineup. Williams joins bassist Bill Jackson, lead guitarist Jeff Young and singer/guitarist Chris Clark. The band will be bringing their brand of premium high octane sleaze rock to the first ever “Sleazey, Slimey Sunday” event on May 1st at Cancun Cantina in Hanover, MD along with The Fifth, Korupt, Kickin Valentina and Ted Poley.”

Last Call Messiahs‘ debut EP landed the number nine spot on Sleaze Roxx’s Top Ten Albums of 2014. Sleaze Roxx stated in that regard: “Released during the last month of 2014, this gem of an EP would have surely been overlooked had Last Call Messiahs not been hand picked to play at the M-Pre Party in Columbia, Maryland of this year. Judging by some of the new songs that the band played at the M-Pre Party in April 2015, Last Call Messiahs may well be able to record a worthy follow up to their stellar self-titled debut EP.”