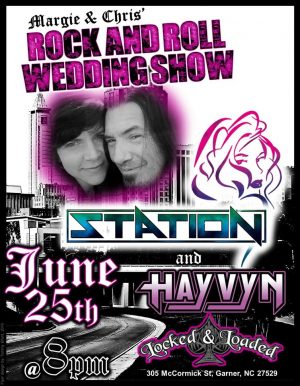 Sleaze Roxx caught up with the soon to be married couple to find out a little more about their rock n’ roll wedding reception.

In terms of how and when they met, DiBernardo stated: “We officially met on Facebook, through the M3 Rockers page. I was part of the team spotlighting the M-Pre Party bands [pre-party prior to the M3 Rock Festival] and I sent Chris a friend request. We met in person at the Sonoma show the next week [on April 30, 2015].

With respect to why have a rock n’ roll wedding reception, DiBernardo pointed out, “Well, music brought us together and it’s probably the thing we love the most. We have met our best friends through the music we love and shows we’ve been to together… it just made sense.

Clark indicated how he and his wife to be know the bands that are on the June 25th bill: “We know Station through the Pre Party and Last Call Messiahs sharing the stage with them in Raleigh last year. Hayvyn are a local band from Raleigh that I really love and they embody the spirit of The Darkness, The Sweet and all things KISS. We picked Locked & Loaded because it’s a great restaurant and music venue close to downtown Raleigh [in North Carolina, USA].

When asked why Last Call Messiahs were not on the bill, Clark stated: “Last Call Messiahs isn’t playing because Dee [Williams], our drummer will be out of town that weekend. There could be some sort of all star jam with a few of us at the end of the night. I wouldn’t rule that out.”

Last Call Messiahs were recently nominated for Best Rock Band for the 2016 Carolina Music Awards. The group will be walking the red carpet on August 6th with the rest of the nominees. People can vote for their favorite artists.