UK rockers Last Great Dreamers will be celebrating the 25th year anniversary of the release of their debut album Retrosexual with a deluxe vinyl edition of the album on November 15, 2019 and a special anniversary show at The Lounge in Camden, UK on November 16, 2019.

“Powerpop rockers Last Great Dreamers are to celebrate the 25th Anniversary of their classic debut album this autumn with a first-time vinyl edition and a special London show.

Originally released in 1994 though Bleeding Hearts Records, Retrosexual picked up rave reviews at the time, being voted album of the year by legendary rock journalist Geoff Barton, earning them a nomination for Best New Band in Kerrang!

Previously only released on CD, the band have had the album fully remastered for a deluxe limited vinyl edition, including free download card, set for release on November 15th.

Formed by singer/guitarists Marc Valentine and Slyder Smith out of the ashes of Soho glamsters Silver Hearts in ’93, Last Great Dreamers made a name for themselves touring the UK with various visiting US giants, before imploding in ’97. In 2014, a CD of previously unreleased material brought renewed interest in the band, seeing a revamped line-up return to the stage, followed by brand new albums Transmissions From Oblivion in 2016 and the acclaimed 13th Floor Renegades in 2018.

The band, now featuring bassist Tim Emery and drummer Rik Pratt, will be celebrating the anniversary with a very special show at The Lounge, Camden, UK on Saturday, November 16th, where they’ll perform Retrosexual in its entirety, including 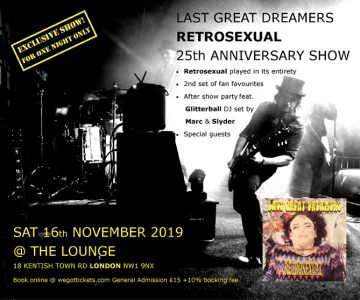 tracks never before played live, along with a second set of fan favourites. The show will be followed by an exclusive after-party with Marc and Slyder on the decks, recreating their original Glitterball club nights.

Slyder says: “Marc and I haven’t played some of these songs live for over twenty years so relearning them has been great and we are both really excited about the prospect of playing them again. We know this album means a lot to many of our fans so it will be a privilege to play it for them in its entirety. It’s gonna be a real party atmosphere, a celebration, we have a few special things planned and hopefully a few special guests.”

The band will be offering special VIP packages, and are planning a Dreamers Magical Mystery Minibus Tour of London, where the band will guide tourists through locations and events from their salubrious past!

Tickets for the anniversary show are available at a special early bird rate ‘til June 20th here.