Last In Line aiming to have new album out in 2018 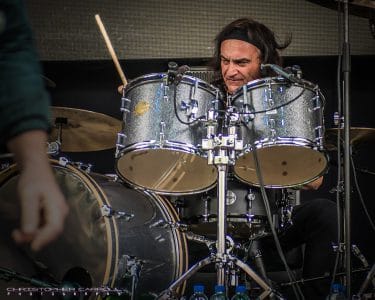 In terms of the state of Last In Line‘s sophomore album, Appice advised: “We went into the studio and recorded five songs, basic tracks. Andy is in the process of finishing some vocals on a few of them. It sounds great. We are writing with Phil Soussan on bass which has been very productive and creative. The other day we got together and wrote a couple of more ideas. We usually write them and then live with them for a little while before sending them to Andy to add the melody. We are going back in the studio in December to hopefully finish another four or five songs. The goal is to have the CD out sometime next year. We also have some shows on the East Coast in November. All the places we played earlier this year want us back! They want to book the band again even though we were just there!”

Last In Line played a limited run of shows in support of their debut album Heavy Crown. Appice was asked whether this was due to scheduling conflicts between the band members to which the drummer stated: “There are some scheduling things with Def Leppard so we could only do it when Vivian was not playing with them as he is quite busy. Also, Andy Freeman [Last in Line] and Phil Soussan perform in the Las Vegas show, Rock Vault. We have those shows on the East Coast this year, and then in the beginning of first quarter next year, we will do more shows. It will be like four or five shows at a time.”

You can read the rest of the interview with Appice at Metal Rules.