LastWorld featuring multi-instrumentalist Jim Shepard and singer David Cagle will be releasing their new studio album Over The Edge via Perris Records on September 18, 2020. 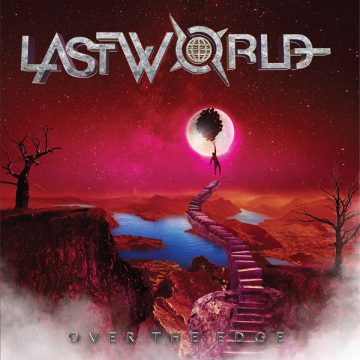 “Perris Records and LastWorld announce September 18th, 2020 as the worldwide release date for the new studio album, ‘Over The Edge‘. This new melodic album is a great follow up to the last release “Time” on MelodicRock Records. Once again David Cagle has recorded a flawless rock vocal showcase on these songs. Jim Shepard has also wrote songs that fit nicely alongside with his past releases, handling all instruments. Perris Records will be distributing the release worldwide and promoting to hundreds of radio stations, podcast and websites across the globe. LastWorld has brought back the mastering guru JK Northrup. JK has many credits to his name as a producer, engineer and musician including King Kobra, Paul Shortino, Billy Thorpe and XYZ to name a few.

LastWorld is guitarist/multi-instrumentalist/songwriter Jim Shepard and vocalist David Cagle.  The new studio release “Over The Edge” is the follow up to their debut album “Time” on MelodicRock Records. JK Northrup, the master of mastering was brought in again to boost the sonics, so fans will hear the best versions of these recordings. Jim has again delivered his best songs and performance to date and David once again delivering a flawless rock vocal showcase.

Jim Shepard is an American independent multi-instrumentalist who has recorded several solo albums as well as his band Taxi, who dominated the Northwest Indiana rock scene in the 90s. Award-winning international singer David Cagle has recorded vocals on more than 1,000 songs over the past 10 years for clients all over the world, covering multiple genres of music. Although a singer of many styles, Cagle is most known for his melodic, soulful rock voice.”