Styx singer keyboardist Lawrence Gowan was recently interviewed on the Tunestiles Podcast and was asked about the hit single “Mr. Roboto” making its way into the band’s setlist again a long hiatus.

Gowan replied: “I can say this, since the time I joined the band Tommy, J.Y. and Chuck never had anything disparaging to say about any music they’ve ever done within the band ever. They did however have plenty to say about one tour’s experience as opposed as it relates to another. 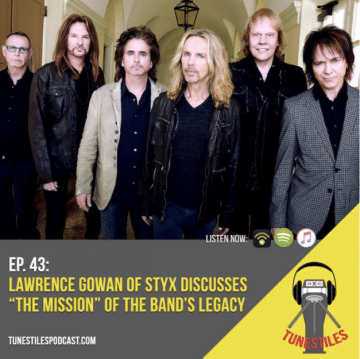 The “Kilroy Was Here” tour was a big risk they took, playing, for them, smaller, small theaters when they could have been playing stadiums. And at the end of it, it was a great financial burden for them to do that at that point in their careers.

I’m just telling you, this is this is how learned in my Styx history class *** laughs ***

They were younger men at the time and it led to a lot of disharmony at the end of that tour. And so, you know, by association they basically had linked together to “Kilroy Was Here” experience with a sour taste in their mouth.

And, year after year, you start to hear people saying, will you guys ever get to play “Mr. Roboto” and we’d bring it up. It was just kind of the reaction from the guys who were there for that tour. It wasn’t the song, it was the experience of that tour that they we’re like ‘I don’t know if I want to revisit that.’

Then one morning on the bus, as far back as maybe 2013 or 2014, Tommy strumming the beginning of “Mr. Roboto”…he was playing it and I started singing along with it. And, you could tell time has kind of weathered down the heart, the sharp corners on that, and the emotions…

…well, roll the clock ahead, and when we had the tour with Joan Jett, the new album had been out for a year and, Tommy just said, let’s try to work out “Mr. Roboto.” And I was like, absolutely!

It’s become a cultural reference, you hear in movies here and all kinds of things. It’s a great history, part of the band and who you guys were then, and it’s important to acknowledge that.

So we went into a studio in Nashville, and we spent a couple of days learning it…and as a result, we worked up a pretty smokin’ version of that piece of music. It’s pretty hard hitting. When we play the song we do it very seriously, it’s not tongue-in-cheek. There’s no comedy along with it. It’s about a guy who’s got a dark secret that he is dying to reveal. And I love that that point of view to sing from because it reminds me in some ways of “A Criminal Mind” in a weird way, because it’s mentally a similar, similar stance.”

You can listen to the interview with Lawrence Gowan at the Tunestiles Podcast‘s website.