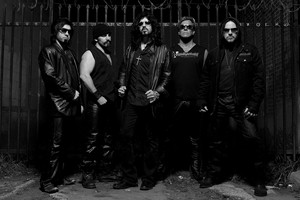 Leatherwolf Hit The Road In Support Of ‘Unchained’

The rejuvenated line-up consists of original members vocalist/guitarist Michael Olivieri and drummer Dean Roberts, long-time friend and bassist Patrick Guyton, and the guitar duo of Rob Math and Greg Erba. “We are all excited about this new constellation and the possibilities it holds,” enthuses Olivieri. “More than anything, we’re looking forward to getting out there and really kicking some ass on stage. I think live is where it’s always been at for us and this group of guys can definitely deliver the goods!”

‘Unchained’ was mixed by producer extraordinaire Roy Z, whose resume includes Judas Priest, Sepultura, Halford, Bruce Dickinson and many others. Though the release date is yet to be announced, fans can download a free MP3 single of “Spiter” from ‘Unchained’ by liking the only official Leatherwolf Facebook page at www.facebook.com/leatherwolfmetal.

The band also launched a new official web site at LeatherwolfMetal.com where their classic releases are available for purchase as MP3 (320Kbp) downloads. Fans can watch videos, stay informed with the latest news, find tour dates and sign up for the Leatherwolf Newsletter.