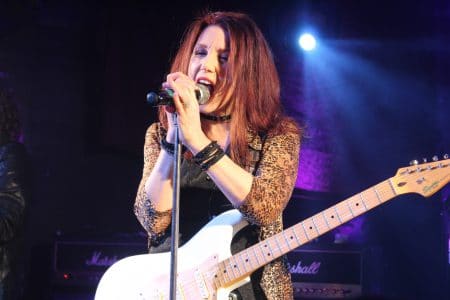 “I can’t give you an exact date for the new album, or an album title yet because I literally just got the mastered versions of the songs in my Dropbox a week ago. The next step is trying to figure out how exactly we want to put it out. The last two studio albums and then our live in Germany CD/DVD last year, they have all been on my own label, Big Sister Records with an international distributor. And the reason we have done that is because we don’t need anybody to tell us how to make records anymore. I don’t really want to give up an inch of creative control these days. And that’s why we have done it through our own boutique label. So, for this new record, we will be sorting out over the next month or so how we want it to be released. I would say that it would be safe to say that this album will be hitting the streets before summer 2021.

It’s definitely a continuation in the vein of the last two records. And unlike Diamond Baby Blues, it’s 100 per cent original. We wrote all the songs. When we got together to write this new album, we did it through a different process that we have done in the past. Because we are a bicoastal band with Sean Kelly living in Toronto, we would send ideas and files and voice memos back and forth and wrote the songs that way. For this record, we realized that there is something very magical that happens when just the four of us get together on a stage or in a room to jam. I have expressed this on multiple occasions to the guys in the band that there’s an energy that happens when we’re just doing a sound check and jamming on an idea that gets lost when we’re just sending files back and forth. So, we just had Sean come out here to Vancouver. We told him to bring three or four of his best ideas and we would bring ours, and we would hunker down together for a couple of days like we’re a high school garage band. We had two 14-hour days just piecing together these ideas as a band and jamming and the spirit behind those sessions was, without any filters, without thinking about having to write singles, let’s just write an album that we would love playing for our friends. Let’s just write some really cool songs. And so, we basically wrote 12 songs in two days. There’s such an authentic energy to this new album, were I think we’re getting closer and closer to sounding like the genuine pure rock and roll band that we are.”

You can read the rest of the article / interview with Lee Aaron by Jim Barber at Music Life Magazine‘s website.