The Canadian metal queen Lee Aaron will be releasing a live album in early 2019.

The following message was posted on Lee Aaron‘s Facebook page back on October 5, 2018: 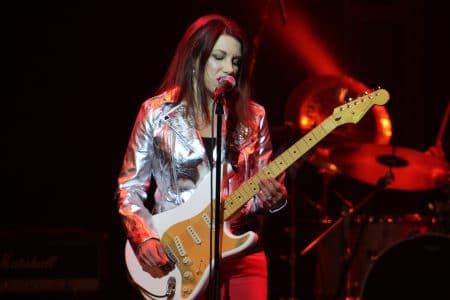 “Thank you, thank you all for an amazing summer/fall full of Diamond Baby Blues tour dates and getting to meet many of you in person across Canada and abroad! This fall we are getting to work on a brand NEW video for ‘I’m a Woman’ (coming any day now!) and a ‘live’ album to be released early 2019. Onward and upward in the Lee Aaron camp…thanks for keeping the flame alight:)”

Sleaze Roxx caught Lee Aaron performing live at the Rose Theatre Brampton in Brampton, Ontario, Canada back in November 2017 and stated in its concert review: “Lee Aaron‘s set turned out to be a really good greatest hits set mixed in with many new songs. The breakdown of her set on this night was obviously one song from her Metal Queen (1984) album, one track was from her self-titled record (1987), three from Bodyrock (1989), two from Some Girls Do (1991), surprisingly two from Emotional Rain (1994), three from Fire And Gasoline (2016) and two from her upcoming new album. Funny enough, even though Lee Aaron has been coming to play seemingly annually in the greater Toronto area over the last couple of years, I had always skipped her concerts thinking that I wouldn’t really enjoy them but she definitely proved me wrong on this night. Next time Lee Aaron comes to town, I’ll be sure to catch her playing live!”