Canadian female rocker Lee Aaron recently played three shows in three nights the province of Ontario in Canada and she was interviewed by the Niagara Falls Review in advance of those gigs. 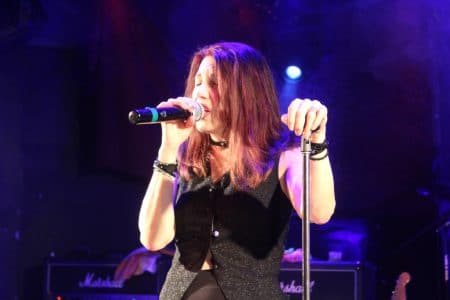 In terms of what is her relationship with the song “Metal Queen” that put her on the heavy metal map back in the day, and whether she plays it out of obligation or has found a way to enjoy it, Lee Aaron advised: “The more I’ve talked to fans over the years, the more I’ve come to understand how much the song means to them. I went through a phase of not wanting to play it because of the negative labels the media had attached to it, and to me — sexism and risky lifestyle — because of the genre, not because of the actual song. When you have a huge body of work and you’re labelled for one tune, it’s disheartening. But to fans, men and women alike, it’s an anthem of strength and empowerment, which was the original intent of the song. Stupid video, yes, but hey, it was a product of 1984.”

With respect to what needs to happen for rock to re-establish itself, Lee Aaron opined: “Charts don’t mean what they used to and albums have become simply an advertisement for your live show, so in some ways I disagree. More and more classic rock festivals are cropping up across the country (we play them regularly) and they are hugely successful. In the last decade, I have seen more folks under 25 at our shows than ever before so I think there is a hunger out there for ‘real’ authentic, un-digitized music. The Billboard top 20 literally, all sound like they’ve been churned out of the same robotic, hit-grinder. All that vocal pitch correction and sampled drums locked to a grid, I find some of it unlistenable. With new acts like Greta Van Fleet, Courtney Barnett, Rival Sons and The Struts, just to name a few, there definitely seems to be a bit of a revival for old-school sounds with a younger generation. Let’s keep our fingers crossed …”

You can read the rest of the interview with Lee Aaron at the Niagara Falls Review‘s website.