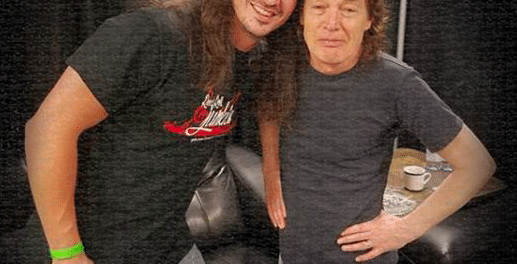 The AC/DC Beyond The Thunder podcast has an interesting guest for its Season 2 as it has interviewed Lee Robinson, one of four known singers, who auditioned with AC/DC to replace Brian Johnson back in early 2016.

One of the other singers to audio was Darren Caperna who is the lead vocalist for the bands Stripwired and the well respected AC/DC tribute band Back In Black. You can read about Caperna‘s audition in the interview that Sleaze Roxx did with him back in December 2018. 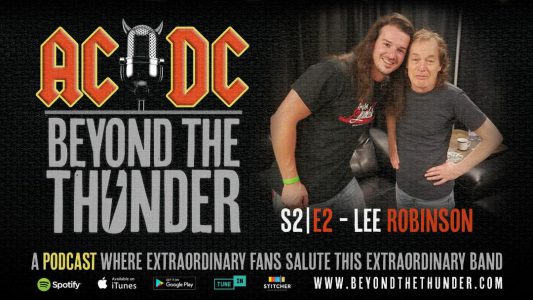 “What’s it like to stand in the shoes of Brian Johnson, or Bon Scott, for that matter? Season 2 of AC/DC Beyond the Thunder podcast asks that very question, exploring a once-in-a-lifetime audition with AC/DC tribute band singer, Lee Robinson, just one of four known vocalists to try out for AC/DC.

It turns out AC/DC’s search for a new singer, back when Brian Johnson‘s hearing loss forced him to leave the Rock Or Bust Tour, did not begin and end with Axl Rose, who was eventually announced as the replacement for Brian on the rockers’ final stadium tour dates. In fact, AC/DC came close to doing what Judas Priest had done before them, plucking a new frontman from the obscurity of the AC/DC tribute band circuit in the form of vocalist, Lee Robinson (aka Bon Johnson) from the band Thunderstruck out of Raleigh, North Carolina.

After being discovered on YouTube by AC/DC bassist, Cliff Williams, Robinson incredulously received the call to be flown down to Atlanta to show the boys his vocal chops, but not before being fired as a commercial HVAC technician by Robinson‘s supervisor after leaving for this opportunity of a lifetime. “I said, it’s worth losing my job at this point”.

Leading up to this dream-come-true audition to possibly replace long-time AC/DC vocalist Brian Johnson, Robinson spent, “about two days in the wood shed going over vocals,” as well as “a whole lot of not sleeping.”

When the time arrived on March 14, 2016, Robinson entered the Atlanta studio at 9:00 am, met with the road crew, got familiar with AC/DC’s gear, and was then asked to warm up with one Brian Johnson song (“Back In Black”) and one Bon Scott song (“Touch Too Much”) playing along with the tech crew before the band arrived—but not without a disastrous beginning.

“I actually could barely sing. I was so nervous and so uptight,” remembers Robinson. “I couldn’t get anything out.” The tech crew stopped playing and they all just went dead silent. At that point Robinson asked, “Have I wasted anybody’s time yet?”

That deciding question would soon be up to Angus Young & Company, who then entered the studio with drummer Chris Slade, bassist Cliff Williams, and rhythm guitarist Stevie Young, Angus Young’s nephew who’d replaced founding member, Malcolm Young back in July 2014.

How did the audition go from there? After performing Hells Bells, a resurrected Robinson, likely the only vocalist to audition for AC/DC in standard tuning, smiled when Stevie Young looked over with approval and said, “Now that’s the way it supposed to sound!” An impressed Angus Young eventually  pulled Robinson aside to confess, “you’ve got a hell of a voice”.

Although Lee ultimately lost out to Guns ’N’ Roses singer, Axl Rose, his entire inspirational story can be heard on Episode 2 of AC/DC Beyond the Thunder.

As AC/DC’s best selling hard rock album of all time, Back In Black, celebrated its 40th anniversary on July 25, Season 2 of AC/DC Beyond the Thunder is slated for many more high profile guests from various walks of life, recalling their life-changing moments thanks to this Australian band.

Created by duo Gregg Ferguson & Kurt Squiers, AC/DC Beyond the Thunder originally set out to be a feature length documentary film. After shooting on the Highway to Hell for years, Ferguson and Squiers approached AC/DC’s management to seek partnership with the band for a world-wide commercial release. After countless attempts for a face-to-face, the duo sent a proof of concept edit for review, and while the band said they, “weren’t quite ready to make a historic film while still making history,” AC/DC liked what they saw. But with no partnership, and no music rights from the band, AC/DC Beyond the Thunder was, for all intents and purposes, shot down in flames.

Wondering if the film would ever catch lightning, Ferguson and Squiers decided to unearth these wonderful stories of extraordinary fans discussing their affinity for AC/DC and harness that energy into a vehicle that just might work… a podcast. After capturing over 50 interviews and with a newfound momentum to create all new episodes with sound engineer, Eric Kielb, AC/DC Beyond the Thunder is back, serving up inspirational stories about the fans, for the fans, by the fans. For those about to listen, we salute you.

AC/DC Beyond the Thunder can be heard on Spotify, Apple Podcasts, or any of your favorite podcast apps.

Fans of the podcast can visit AC/DC Beyond the Thunder to provide feedback and ideas for the podcast, or to become a guest on the show. For more information contact Kurt Squiers @ 207.210.7281.