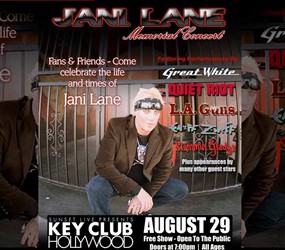 Some of the biggest hair bands are reuniting at Los Angeles’ Key Club on August 29th to pay tribute to their fallen comrade Jani Lane… and they’re doing it for free.

Great White, Quiet Riot, L.A. Guns, Enuff Z’nuff, Slammin’ Gladys, plus appearances by many other guest stars are all set to perform at the Key Club in Hollywood to celebrate the life and times of Janie Lane — and TMZ.com have been told that Lane’s family will be there.

300 free tickets will be given out on a first come, first served basis at the Key Club box office starting at 10:00 AM. Doors open for the memorial show at 7:00 PM.

Lane — the former lead singer for the rock band Warrant — died last week at an L.A. hotel. Officials have not released his official cause of death.

Lane’s former bandmates in Warrant held their own tribute for the singer at their August 12th show in Grand Forks, North Dakota. A touching review of what unfolded that night can be found at www.sleazeroxx.com/vault/janilanetribute.shtml.

Courtesy of www.sleazeroxx.com and www.tmz.com