Demon Doll Records and Metal Legacy Records are at it again as they have reissued ’90s rockers Legend‘s debut album Sex And Violence with eight bonus tracks. 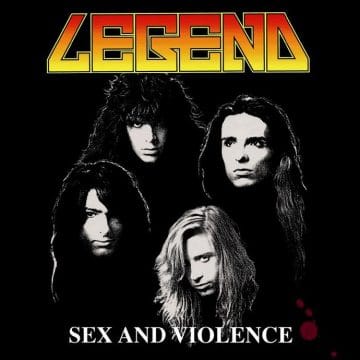 “Who’s ready for some “Sex And Violence” and 8 bonus tracks while we’re at it!

Demon Doll and Metal Legacy Records are proud to have teamed up with early 90’s bad boys LEGEND to reissue their amazing debut album “Sex And Violence.”

Why don’t we let Kerrang’s triple K rating speak for itself:

“Hailing from the Boston area, Legend are building up a cult following in that neck of the woods with a sound that takes its cue from the techno Metal of Queensryche, as well as the sleazier climates from the worlds of Guns N’ Roses, Bang Tango and Sweet F.A. The musicianship is strong, the songs are vivid and there’s plenty of energy flying around…when Legend are good they’re almost excellent.

Opening cut “Electric Romeo” is a minor classic with a nasty attitude and the urge to f**k ’til dawn, thanks to some terrific bottom end from bassist Brian Thomas and drummer Mick Silver paired to some nasty guitar riffs from Ash Lee Pederson.

“Walk Away”, “Middle Of Night” and “Bottom Of the Deck” are three more terrific tastes of Legend‘s songwriting talents with “Pullout” being another highlight that features some hysterical but well thought out lyrics combined to a Glam vibe that reminds me of St. Jaimz.

Fronted by possible future star in vocalist Tyler Kaye, Legend are a quite exciting prospect”

All songs have been digitally remastered and this album comes packaged in an 8 page booklet with a full set of lyrics to the original album tracks.

Legend‘s “Electric Romeo” song (from 2019 reissue of Sex And Violence):