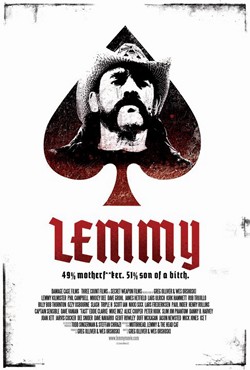 Lemmy: The Film To Hit U.S. Theaters In Mid-January

At long last, details for the U.S. release of LEMMY have been released. The film will hit select U.S. cities (mostly major markets) starting in mid-January. The DVD, which will be a two-DVD set (with 4 hours of incredible bonus features — more than any other country), will be released on Feb. 15. The film will also be available for digital download starting that day in the U.S. More details coming in the next few days.

Over four decades, Motorhead frontman Lemmy Kilmister has registered an immeasurable impact on music history. At 62, he remains the living embodiment of the rock and roll lifestyle, and this feature-length documentary tells his story, one of a hard-living rock icon who continues to live the life of a man half his age. Shot on a combination of High Definition and Super 16mm film, the film will include interviews with friends, family, bandmates past and present and such admirers/peers as Slash, Dave Grohl (Nirvana/Foo Fighters), Ozzy Osbourne, Peter Hook (Joy Division/New Order), wrestling superstar Triple H, Alice Cooper, Mick Jones of The Clash, C.C. Deville of Poison, and many others. The film crushes all myths, rumors and speculation about Lemmy, while giving his millions of fans more access to his life than ever before.