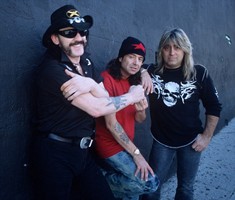 Most dedicated fans of a band or group would do anything in their power to get their hands on the latest memorabilia. But Motorhead have veered away from the norm, and encouraged fans not to buy their new 15-disc boxset – because it has a recommended retail price of £375.

The limited edition The Complete Early Years, released by Universal music, includes eight of Motorhead’s earlier albums, as well as a collection of singles, posters and a book of photos. In addition, the boxset comes inside a fake skull, complete with red light-up eyes.

But according to the Daily Mail Motorhead were so incensed by the extortionate cost of the collection that they released a statement telling their fans not to buy it.

The statement reads: ‘Motorhead have no control over what’s done with these early songs, and don’t want fans to think that the band is involved in putting out such a costly boxset.’

The band’s frontman Lemmy Kilmister added meanwhile: ‘Unfortunately greed once again rears its yapping head. I would advise against it even for the most rabid completists.’

And fans haven’t taken much persuasion not to buy the boxset, with one complaining on the group’s official forum: ‘There’s nothing new in that box, not even one new song.’

Motorhead are the latest artists to complain about the price of a collection put out in their name. Back in November, Elvis Costello labelled the £212 boxset sold by Universal an ‘elaborate hoax’, adding that the price was ‘either a misprint or a satire.’