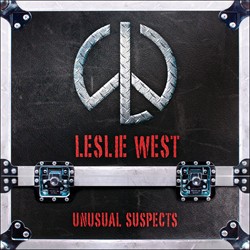 Legendary guitarist and Mountain founder Leslie West will release a brand new solo album entitled ‘Unusual Suspects’ on Monday September 19th 2011. The album is his first since 2006’s Blue Me.

“These guys don’t just show up to play on everybody’s albums,” says West on his special guests and the album’s title. “They’re all stars in their own right, and fantastic players — everyone with their own sound and style, about as far from ‘the usual suspects’ as it gets.”

West has been responsible for one of the biggest, boldest electric guitar tones known to man, ever since Mountain’s infamous Woodstock festival appearance in 1969. He shows no sign of letting up on the riveting new album ‘Unusual Suspects’ and his voice is perhaps more recognizable these days — a powerful mix of honey and gravel that falls somewhere between Otis Redding and King Kong.

‘Unusual Suspects’ is a proud mix of boogie blues, rockers and ballads that showcase West’s hardened songwriting skills, particularly on the hard rocking Mississippi Queen flashback Mudflap Mama, and the sweet, soulful love song You and Me.