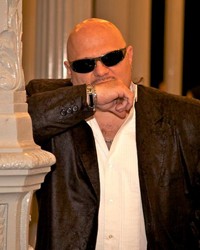 Liberty N’ Justice is excited to announce its newest member on keyboards… Eric Ragno! Eric joins JK Northrup and Justin Murr as the three of them continue to search for a lead singer and a drummer.

Murr had this to say, “Our yet to be released double CD ‘The Cigar Chronicles’ will be our last all-star album as LNJ stops being a project and becomes a band! When I spoke to JK and we had a dream list of players, Eric was on top of our list as a keyboardist. To have him having him in this band is a thrill and what he brings in talent is amazing. While waiting for ‘The Cigar Chronicles’ to be finished, the three of us started writing and recording some new music and we have great chemistry. I’m really excited for the future of LNJ…”

Northrup added, “I have had the privilege of working with the amazingly talented Eric Ragno on a number of different albums and projects over the past 5 years. Not only is Eric one of the most gifted musician/songwriters I know, but he is also one of the most amazing person’s I know! Welcome aboard the Liberty N’ Justice ship Brother Eric. It’s going to be a fun ride.”

Eric finished by saying, “Wow… what can I say? My first collaboration with Justin Murr and Liberty N’ Justice was on the ‘Light It Up’ album. The legacy that Justin has built has been pretty amazing, and consistent! We kept in touch, and I was thrilled when he invited me back to add keyboards to the upcoming CD ‘The Cigar Chronicles’. Justin seems to “get me” and my style, and has been both supportive and inclusive. Then, there’s JK Northrup! I’ve admired JK forever, going back to his work with Paul Shortino. I was supremely happy with the way he mixed my keys on Ted Poley’s ‘Smile’ CD. When it came time to mix my own China Blue record, I knew JK would once again find the perfect balance of loud rock guitars and sweeping keyboards. Again, another guy I totally respect who completely “gets me”! I’d hoped to work with each of these men more in the future, but our schedules made it pretty impossible… until now. We’ve already started some great music together, with much more to follow! Stay tuned folks — we’re on the brink of something great here. Be well and rock on! ”