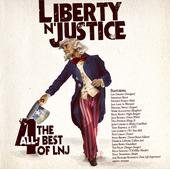 Liberty N’ Justice (the Melodic Rockers with a Message) formed 17 years ago, and with 8 albums to their credit are still blasting out new music louder than ever!

In 2004 Liberty N’ Justice went from a full band to a studio project based around the songwriting of LNJ’s founder, Justin Murr. The concept went on to gain LNJ worldwide recognition by getting “known” singers from some of the world’s most famous Christian and Rock bands to sing their songs.

On March 28th Versallis Records is releasing Liberty N’ Justice “4-All: The Best Of LNJ”. Now you can hear a glimpse of one of the four new songs, “We Have A God”, featuring lead vocals by Derrick Lefevre (Lillian Axe) & Larry Worley (FearNot) at LNJ’s MySpace page… www.myspace.com/libertynjustice2 and while your there make sure to wish Justin a Happy B-Day he turns 35 on Jan. 23rd.