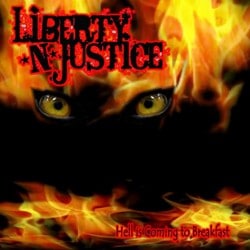 Roxx Productions, along with Liberty N’ Justice, are very pleased to announce for LNJ’s 20th Anniversary (1992-2012) the release of their 11th studio album ‘Hell Is Coming To Breakfast’. This marks the band’s second release on Roxx Records after a successful partnership on the Limited Edition charity CD entitled ‘Chasing A Cure LP’ that the two teamed up on earlier in 2011. ‘Hell Is Coming To Breakfast’ is set for release on March 1, 2012 with pre-sales beginning now at www.roxxproductions.com.

Justin Murr of Liberty N’ Justice has this to say about the release, “We recorded so many songs for our yet to be released 2 CD project entitled ‘The Cigar Chronicles’, and with the delay on this release not happening until late in 2012 or early 2013, we didn’t want the fans to have to wait that long to get some new LNJ in their hands. So when Bill and Roxx Records approached me and asked if we had anything else up our sleeves we could release, we realized we had to many songs that were not all going to fit on ‘Cigar’ so we took the 6 songs that we couldn’t fit and then recorded another brand new song which is the title track ‘Hell Is Coming To Breakfast’ especially for this release and added 5 more previously unreleased rare cuts and demos just for this one, I am really excited for our fans to hear this collection.”

Bill from Roxx Records had this to say about the new release, “We are very excited to be working with Justin and Liberty N’ Justice once again, especially in the band’s twentieth year! Justin and all the wonderful artists he works with continue to release nothing but top notch material and after twenty years it is just amazing how they keep coming up with so many great Melodic Rock songs again and again and again.”

In addition to the seven brand new tracks, various demos, and rarities, Liberty N’ Justice are very excited to be able to include on this release, and on CD for the very first time ever, the original acoustic demo version of ‘Sin’ featuring the late great Jani Lane of Warrant out front on vocals.