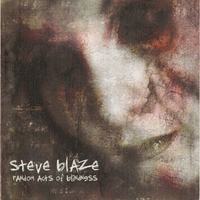 Lillian Axe Enterprises is proud to announce that Steve Blaze’s first solo CD is now available for download at www.cdbaby.com/cd/SteveBlaze. Steve’s CD has only been available at certain Lillian Axe shows over the years but now the world can experience and enjoy Steve’s artistry, passion, vision, guitar wizardry and dynamics heard on “Random Acts of Blindness.”

Founder, lead guitarist, and songwriter of Lillian Axe, Steve Blaze’s infinite talents incorporate many musical realms, earning him international recognition as a guitar hero and creative visionary. With his unique guitar style, ranging from classical and flamenco to his signature “blazing” style, his music stands the test of time.

Steve Blaze is no stranger to all aspects of the industry. He has done hundreds of worldwide radio, internet and print interviews from fanzines to major publications such as Metal Edge, Hit Parader, Creem, RIP, Kerrang, SPIN, Burrn!, Metal Hammer, and Rock Hard. Blaze personally endorsed Jackson-Charvel, Ibanez, Parker, Washburn, and Robin guitars, S.I.T. Strings, Mesa/Boogie Amps, Johnson Amps, and Morely Effects; he has appeared in Ibanez and Jackson guitar ads for major music publications. He now has his own signature guitar, the Guilford “Blaze” guitar that incorporates everything he loved about every guitar he ever owned. Blaze is currently endorsed by Guilford Guitars, Peavey Cabinets and Amps, SIT Strings, InTune Guitar Pics and EV Wireless Systems. In addition to MTV videos, Steve has made several television appearances from PBS concerts, to an ABC news story.

Blaze is an exceptional songwriter characterized by his timeless, enigmatic melodies intertwined with soul gratifying lyrics. His passion for classical music and his openness to all forms of music serve as inspiration for his mystical compositions. He is a flexible musician in that he not only listens to all forms of music but can play them as well.

Steve credits some of his heroes as Alice Cooper, Kiss, Ozzy Osbourne, Queen, Styx, Kansas and Black Sabbath among others. Steve Blaze’s limitations are infinite and has been accurately described by his ad for Ibanez Guitars: “Stevie Blaze, the first of a new breed with a fresh approach to rock”. Steve Blaze was also voted one of the Top 40 “Most Underrated Guitar Players” in Guitar Player magazine.