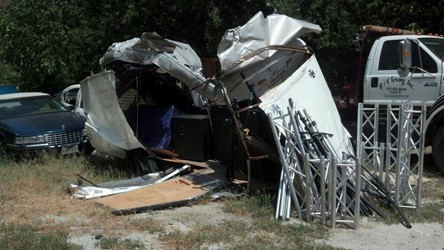 Lillian Axe were forced to cancel their two upcoming Texas shows because the band and crew were involved in a collison when their van slammed into an industrial sign on route to the Trees Club in Dallas. For the first time details of the accident emerge as guitarist Steve Blaze recalls that fateful night, saying he is only alive because of divine intervention.

“I want to tell you about the accident because I feel it’s an important lesson for me and maybe it will touch some people in a positive way. Eric Morris, our bassist, Richard Plaisance, our stage manager, Bobby Brown, our crew and merch guy, and I, left from Mandeville towards Dallas to play Trees Thursday night. All was well and we were meeting the guys in the a.m., sleep a while and hit the venue for soundcheck around 2pm. Since it was only a two date run, we were pulling our trailer with all of our gear with Richie’s Yukon. Around 5 a.m., an hour from our location, I was awakened, (I had fallen asleep in the front passenger seat) by Richie’s screams and a very hard impact, the sound of breaking glass and our vehicle hurtling towards something else that through the broken windshield appeared to be a pole of sorts. I keep replaying this moment in my head over and over, and I can hear the sounds and feel the crash every time. I remember while we were hitting things and moving across the grass, that I kept saying “It’s ok, It’s ok, It’s ok…”

Our driver had lost control of the vehicle and left the highway doing around 70 mph and collided with a huge industrial sign, the ones that direct traffic into a certain lane with arrows, etc. I don’t know what this one said because it was obliterated. I found out later that this was one of those extremely large sigs which held 15 or more batteries inside to power the lights. The BIG ones. We finally stopped, and the first thing I thought of was “Am I dead?” My three mates were talking and moving so I knew they were alive. We all felt our bodies to see if we were bleeding or missing any body parts. At that moment the pain in my eyes set in, and I felt burning which I found was the cloud of glass fragments that had entered both of my eyes.

From there on, everything was blurry as the tears poured down my face due to the glass. Richie, who was behind me, and I tried to open our doors but they were crushed and would not budge. Eric and Bobby got out on their side, so Richie and I climbed across the seats and exited their doors. The guys told me later that my first words were “Don’t worry, we can still do the gig.” I don’t remember that. The next bit was like a dream. I fell to the ground, no shoes and socks on, and noticed I was in some kind of very hard grass or weeds, almost like little bamboo shoots. I yelled out ” Are you guys ok?” We all acknowledged that we were alive and seemingly in one piece. Cars started pulling up and people were getting out to see if we were ok. The strange part is that all seemed to leave when they found out we were alive.

I will try to explain the scene through my blurred vision. Richie came up to me as I was sitting on the ground and I said “We’ll be ok.” He said frantically “Have you seen the trailer?” I could see nothing but lights and shadows at that point. I squinted and saw what I thought was a giant dumpster covered in trash and clothes. I thought that was what we hit! “No that’s the trailer!”

People, I can only tell you that the scene looked like one from a Faces of Death episode. The trailer was shredded as if a can opener had a field day with it. Metal shreds were everywhere and pieces of metal were sticking 20 feet in the air. Equipment, cases, boxes, lights, trussing, etc. was strewn all over scene. The Yukon was completely totaled.

I went to the car to find my shoes and saw that the back seat was halfway shoved to the front and glass was everywhere. The windshield was destroyed and the sun visor had actually penetrated it. I thought it was my head that hit it, but I had no head wounds. Then the screaming red lights and sirens started coming, and all I could think of was that these people were going to be upset that we had stopped traffic for miles. The cops came, the EMT’s came, and I think there was even a firetruck. Things were really blurry and my eyes started burning heavily. There was so much adrenaline flowing that I didn’t realize my other injuries yet. I made sure the guys were good. Bobby seemed ok, Richie knocked a tooth out, had a few cuts and wrenched his back pretty badly. Eric hurt his back and neck pretty badly also, and I started feeling pains in the back and shoulders and arms. The effects of the whiplash would really set in on the three of us over the next 2 days.

The ambulance took the three of us to the nearest emergency hospital. Fortunately, it was a slow night/morning so we were tended to immediately. They irrigated my eyes and Eric’s. I still had a piece in my left eye which I had removed the next day. All three of us have upper torso pain but hopefully that will not lead to future problems. It may have helped that we were asleep at the impact. We spent around four hours in the hospital before being released. Eric had a stylish neck brace on, but I couldn’t convince to take it with him. We were all very blessed to not have been killed. The EMT’s told me that when they pulled up to the scene, they labeled their immediate assessment as this was an “Oh shit” scene, meaning all fatalities. If we had hit the sign head on, we would all be dead, as the trailer and sign would have crushed us to death. If the trailer had not come apart, we would have flipped many times and probably all killed. This was nothing but God saving us, I don’t care what anyone else thinks. I felt his peace as I was being jerked around in that car.

Later that day, we all went to the salvage yard to view the wreckage. Oh my God, it was worse than I thought. The damage to the equipment is still indeterminable until we start plugging things in. There were heavy cases shattered, lights broken, cabinets flipped upside down and on top of each other, etc.

We were able to get everything in pieces into a UHaul truck and sent to our storage facility back home. We were fortunate to have Ken and Richard Kendrick come to our rescue. Richard was filling in for Sam (Poitevent, guitar) on these dates while Sam was out of the country. Richard went way beyond the call of duty in helping us, and we owe him dearly. Ken also helped save the day immensely. Richard brought us to Shreveport where our label president and amazing friend Alan Traylor picked us up and brought us home.

The next few days were filled with rest, aches, pains, but more importantly blessings. Seeing my little boy when I got home was all I needed to understand how incredibly fortunate we all were. If the slightest change in events had occurred, he may not have had a Dad anymore and my wife made a widow.

I remember lying on the hospital bed and getting bombed with texts and emails and calls from so many people that all I could think was, “It happened an hour ago. How does everyone know what went down so quickly?” I can’t stress enough how much it meant to see people from all over the world wishing us well and caring about us, including reaching out to our families as well.

A few people wanted to make sure I had not lost any fingers or an arm. I can proudly say they are all intact. This event was divinely interrupted, and I believe wholeheartedly that God intervened. Thanks again to everyone. I guess the man upstairs knows I still have at least ten more albums to write.”