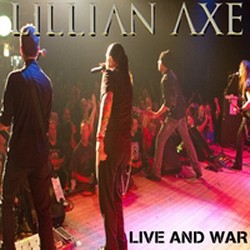 New Orleans based hard rock/metal legends Lillian Axe have released a three song EP called ‘Live And War’, a play on the band’s 1989 ‘Love And War’ album — considered by many to be the definitive Lillian Axe album.

The EP contains live renditions of “All’s Fair In Love And War”, “Ghost Of Winter” and “Show A Little Love”, and can be purchased at CDBaby.com and iTunes.

The band states, “As a special gift for our fans we decided to record three of the songs from this 1989 release — since they are still a staple of today’s Lillian Axe’s live set list — live in concert with the current line up of Lillian Axe featuring vocalist Brian Jones, guitarist Steve Blaze, guitarist Sam Poitevent, bassist Eric Morris and drummer Ken Koudelka. The songs were recorded live in New Orleans on February 4, 2012. All live with no overdubs, exactly as it happened that night. Also keep an eye out for our new video for the song “Death Comes Tomorrow”. When you see this video it is going to blow your mind. If you thought our first video for “Caged In” rocked wait until you see the new one. ‘Nuff said.”

On January 27th Lillian Axe released ‘XI: The Days Before Tomorrow’, the band’s eleventh release and first with new lead vocalist Brian Jones. The album, recorded in Covington, LA at Sound Landing Studios with longtime cohorts Rob Hovey and David Heintz, demonstrates why Lillian Axe is at the top of their game. Produced by Steve Blaze and mixed by platinum producer Sylvia Massy (Tool, Red Hot Chili Peppers, Sevendust, Johnny Cash, Tom Petty and Prince), ‘XI: The Days Before Tomorrow’, deals with heavy issues of the outcasts, the innocent, the hopeless and the true believers.