Lillian Axe featuring guitarist Steve Blaze have signed with new record label Global Rock Records who has some big plans with respect to the re-release of some of the band’s back catalogue as well as the release of a forthcoming new studio album From Womb To Tomb. 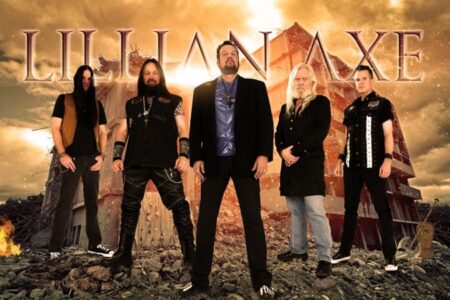 The press release indicates in part (with slight edits):

“Lillian Axe gained international recognition with albums on MCA Records and IRS Records in the late 80’s and early 90’s. They have toured with Alice Cooper, Ratt, Accept and many others, as well as rocking hundreds of thousands of fans worldwide at major festivals such as Sweden Rock, Firefest, and Rocklahoma. Though the music has evolved and progressed in the decades since, the band still treats their audiences to MTV singles like “Dream of A Lifetime,” “Show A Little Love,” and their version of the Badfinger classic “No Matter What.”

The band will headline the launch of the new ident created by The Store, namely Global Rock Records which will seek to release not only catalog titles but potent new releases from established heavy rock and metal based artists.

This will include a number of Lillian Axe back catalogue titles for re-release as well as the forthcoming new Lillian Axe album ‘From Womb To Tomb‘ , which is currently being recorded. The deal was negotiated by Head of A&R Giles Lavery and includes global publishing rights for the main writer Steve Blaze.

The album master rights of the titles include: Poetic Justice, Psychoschizophrenia, Fields of Yesterday, Live 2002, Waters Rising, Sad Day On Planet Earth, Deep Red Shadows, Days Before Tomorrow, One Night In The Temple plus the Steve Blaze solo album Random Acts of Blindness.

All which will form the basis of initially a career spanning multi disc anthology plus reissues of all listed album titles with bonus tracks from Steve Blaze‘s personal archives prior to the release of the new album.

Many albums from other notable artists have been already licensed including Impellitteri, Jack Starr, Bangalore Choir, Bob Kulick, Thrasher, Killing Machine, Rhino, Code Black, Beyond and many more to be announced.

“We are extremely proud to be associated with Lillian Axe and Steve Blaze” writes Managing Director and co-owner Brian Adams. “Their history in the marketplace is second to none and we intend to revamp all earlier releases while we will plan a strong marketing campaign around the new album. It is also an added bonus to have Steve assigned to our publishing arm Cee Dee Music which will give everyone involved an overall feeling of a team effort behind the band.”

Steve Blaze adds, “On behalf of the entire band, I am ecstatic over the start of our relationship with Global Rock Records.  Giles and Brian have been two of the most professional gentlemen I have dealt with in this industry over my entire career. We look forward to a lengthy and prosperous union, as we prepare for our tenth studio album and 14th release.

Even though this is my ninth record deal, I feel the same excitement I did on the first one many years ago! I can’t explain how thrilled we are to not only re-release our catalogue to the world, but to deliver the first studio album in nine years. I honestly feel that our hardcore fans will love “From Womb To Tomb” as well as the brand new legions throughout the planet. Smiles, all smiles”.”