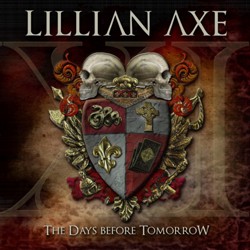 New Orleans based hard rock/metal legends Lillian AXe has just signed with AFM Records. On January 27th the cult band’s new album ‘XI: The Days Before Tomorrow’ will be released, it will be the group’s first with new vocalist Brian Jones.

Producing the new album is Lillian Axe guitarist and songwriter Steve Blaze, engineering is Rob Hovey, and mixing will be done by Sylvia Massey (Tool, Johnny Cash, Deftones, System Of A Down, Prince, Black Crowes). Some of the song titles are “Bow Your Head”, “Gather Up The Snow”, “Soul Disease”, and “The Great Divide”. “Take The Bullet”, the first track with Jones on vocals, who replaced former Metal Church frontman Ronnie Munroe, was released on April 12th and can be purchased at Amazon.com.

Said long-time member Stev Blaze, “This is an important album as it introduces Brian Jones on vocals. As I have been writing this record, there has been a feeling of creativity that is similar to that of when I wrote ‘Psychoschizophrenia’. The band has really done a great job so far. We can’t wait to get back out on the road to support it.”

Jones, vocalist for the bands Guns Of Addiction and Full Moon Circus, as well as guitarist for Wind-up Artist and Papercut Massacre, approached Blaze for the job in September of 2010. He states, “When I initially approached Steve about the possibility of becoming the new vocalist for Lillian Axe, I honestly didn’t know what to think and had a plethora of thoughts running amuck in my head. Having been a lifelong fan of the band and looking to Steve as a mentor for so many years, coupled with the fact that I was being asked to audition for one of my favorite bands, was a bit much to take in. I knew this was what I wanted to do and have been playing now for over 20 years, but I never would have imagined I’d be playing with Lillian Axe. The guys have been amazing and have taken me in quite nicely. I look forward to the many years to come and to the new music that we will be sharing with the fans.”