A number of hard rock bands have come together to deliver an extremely limited edition of the very first compilation CD featuring a veritable who’s who of up and coming hard / melodic rockers. This could possibly be the only time ever to have all of these bands on one CD.

The reason for all these great bands getting together on one CD is that Starr Huguenin, the 47 year old wife of rocker Sean Huguenin and a mother, was diagnosed with a rare form of colon cancer (there are only 2,000 recorded cases) in April 2013. After surgery and a short remission, the cancer unfortunately came back with a vengeance in March 2014. Starr is now in Stage 4, which is considered terminal. Starr and Sean are overwhelmed with day to day living expenses as well as the looming worry of how they will pay for final expenses. The goal of this collaboration is to help ease that stress for them just a little.

100% of the proceeds from the sale of the Starr Struck CD will be donated directly to Starr and Sean Huguenin.

A fundraising campaign has been started through Indiegogo, which has a goal of reaching a minimum of $2,000 US to assist in putting the CD together and out to the public. The fundraising campaign offers a number of perks including the Starr Struck CD, a Huguenin Fender bundle (which includes the guitar used by Sean Huguenin to write his hit song “Set Me Free”) and the Ultimate VIP bundle (which includes signed CDs from just about all the artists). 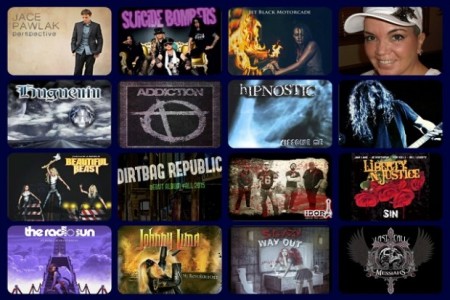