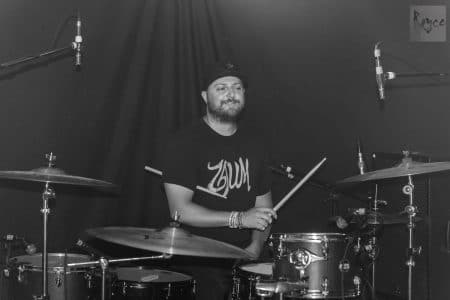 The following message was posted on Lionsault‘s Facebook page yesterday:

“Hey everyone, it’s time to formally introduce our brand spankin’ new lad on the skins, J-D Thibodeau!! JD has recently stepped up to the plate and is now kicking ass with us full time on the drums and he fits like a glove. AND…today is his BIRTHDAY!!

Help us welcome JD to the Lionsault fam by wishing him a happy birthday. Happy birthday bud!”

Lionsault‘s debut album Are You Feeling Lucky? finished at #8 on Sleaze Roxx’s Top Ten Albums of 2015 to which Sleaze Roxx stated: “As soon as I heard the opening guitar riff for the first track “Shoot Em Up” on Lionsault‘s debut album and having already seen the video for the Canadian group’s first single “Living With The Devil” — I knew that I would likely really like what the band had to offer. My first impressions were confirmed as Lionsault delivered what is very difficult to do — a great record mixing classic rock and ’80s sounds with more modern rock. Reminding me at times of Halestorm before they lost their way with Into The Wild Life, the trio that comprise Lionsault seem to have the total package with the bombastic drumming of Chase Nicols, the killer riffs from guitarist Taylor Sheasgreen and the young sounding but powerful vocals of singer/bassist Kortni Nicols. Lionsault are definitely a band to watch for in the future.”

Lionsault‘s “Light It Up” video: