Canadian Maritime rockers Lionsault guitarist Taylor Sheasgreen and singer / bassist Kortni Nicols were recently interviewed by Modern Typewriter and asked about the history of the band. 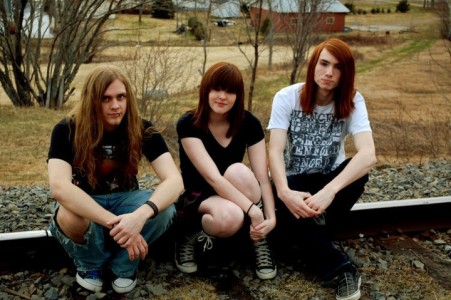 Sheasgreen stated: ‘We’ve been playing together for 8 years, around 2009. But Lionsault, us writing music and making our own stuff, was almost 2 years ago.” To which Nicols chimed in, “June 20th, 2014.”

Eventually, Sheasgreen and Nicols sat down with local musician James M to discuss the possibility of mixing and mastering and releasing their first album as Lionsault. Nicols stated, “We got bored with covers, so we started writing and we were talking to James about mixing and mastering for us and we said, yeah were gonna do an EP and he said fuck the EP thing, do a full album!” Sheasgreen added, “We just hammered down and started writing songs, we pretty much set a mission of creating an album and we just did it!”

Lionsault‘s debut album are you feeling lucky? was released on September 19, 2015. Nicols advised, “We wrote the songs, Taylor would come to us with a riff as an idea and we would work around it, I guess I would take charge in structuring it more I guess?, and then we would sit down and write the lyrics together. Taylor wrote most of the lyrics but I wrote all the melodies. Then we would record everything ourselves too. Once recorded, we sent it away to Under Tone studios in Saint John and It was mastered by a guy named Adam Dincorn.” Sheasgreen added, “He did a really good job and were probably going to go back to him. When the first album was out. We sent it to all kinds of album review website and I probably sent out a shit-ton of them and probably like 20 different websites all came back super positive!”

It turns out that Sleaze Roxx was one of those sites as Lionsault‘s debut album finished #8 on the Sleaze Roxx’s Top Ten Albums of 2015. Sleaze Roxx stated in that regard: “As soon as I heard the opening guitar riff for the first track “Shoot Em Up” on Lionsault‘s debut album and having already seen the video for the Canadian group’s first single “Living With The Devil” — I knew that I would likely really like what the band had to offer. My first impressions were confirmed as Lionsault delivered what is very difficult to do — a great record mixing classic rock and ’80s sounds with more modern rock. Reminding me at times of Halestorm before they lost their way with Into The Wild Life, the trio that comprise Lionsault seem to have the total package with the bombastic drumming of Chase Nicols, the killer riffs from guitarist Taylor Sheasgreen and the young sounding but powerful vocals of singer/bassist Kortini Nicols. Lionsault are definitely a band to watch for in the future.”

You can read the rest of the interview with Sheasgreen and Nicols at Modern-Typewriter.

Lionsault‘s “In The Wild” song:

Lionsault – In the Wild

Lionsault’s brand new single ‘In the Wild’, the new goal theme and written specially for the QMJHL team, the Moncton Wildcats.Available on iTunes now: https:…