Lionsault release video for “Living With The Devil”

Lionsault have released a video for the song “Living With The Devil” from their debut album Are You Feeling Lucky?, which was released on September 19, 2015. 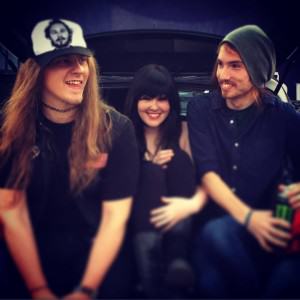 The group hails from the rather small city of Miramichi, New Brunswick, Canada (with a population of less than 20,000 people) and is comprised of Kortni Nicols on vocals and bass, Taylor Sheasgreen on guitar and Chase Nicols on drums.

Lionsault‘s Facebook bio states: “Risen from the ashes of a classic rock cover band, Lionsault have found their calling in a modern hard rock sound with a heavy metal edge. Lionsault has been mastering their craft since 2010, when front-woman Kortni and her brother and drummer Chase recruited lead guitarist Taylor and the band was formed. The pop-punk history of the sister-brother duo of Kortni and Chase combined with the metal and hard rock influence of Taylor came together and slowly the sound of Lionsault began to reveal itself. The result was a hard-hitting, in-your-face hard rock sound, touched by classic rock complimented with a modern metal twist, with intense melodic female vocals leading the way. Lionsault is a trailblazer of rock in their hometown of Miramichi, New Brunswick, and they strive to be the hardest working band in the industry today. The mentality of Lionsault is not just a name. It is a symbol to prove that with hard work, dedication, and true raw passion, success is inevitable.”