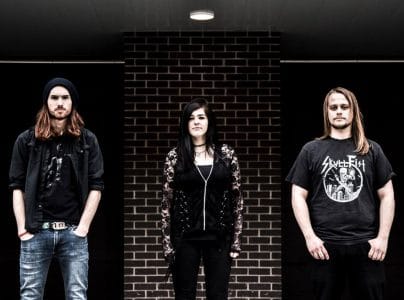 We’ve been going through some changes recently, and we’re happy to announce we have Chase Nicols back on drums full time, and we now have Cody Ramsdale on guitar!

“Some of you may have seen that as of now, I am no longer playing guitar for Lionsault. Lionsault was a huge part of my life for the better part of the past 3 years and I wish them nothing but the best!

Lionsault released their debut album are you feeling lucky? back in September 2015 with the line-up of Kortni Nicols on bass and lead vocals, Chase Nicols on drums and Taylor Sheasgreen on guitar. Their debut album landed the #8 spot on the Sleaze Roxx’s Top Ten Albums of 2015. In June 2017, Lionsault announced a new drummer named J-D Thibodeau without providing the reasons for Chase Nicols‘ departure from the band. Sheasgreen appears to have been playing in both The Motorleague and Lionsault since August 2017.

Lionsault‘s “Light It Up” video: