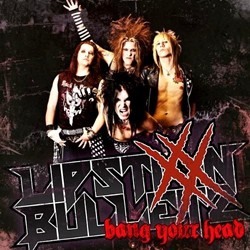 End Of The Light Records will reissue Lipstixx ‘N’ Bulletz’ ‘Bang Your Head’ album on August 28th in North America.

Lipstixx ‘N’ Bulletz was a sleaze rock band from Gothenburg, Sweden that featured drummer Mickey Sweet, brother of Crashdiet’s Martin Sweet. The quartet formed in 2004 and played an energetic, yet unbelievably catchy style of glam metal, before disbanding in early 2012.

‘Bang Your Head’ will be reissued in a deluxe digipak edition on August 28th via End Of The Light Records — endofthelight.com. You can pre-order your copy now through Amazon.com.