While many rock stars are partying into the wee hours of the night, at least one is training during that time. Former Vinnie Vincent Invasion and current Lita Ford drummer Bobby Rock is known to be one of the fittest and built rock stars in the rock n’ roll industry. The drummer is currently training for a half-marathon but during what many may consider rather odd 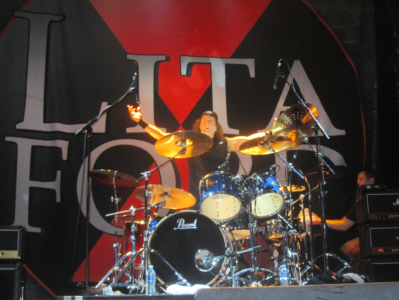 The following message was posted on Rock‘s Facebook page in the morning of March 1, 2019:

“It’s 3:00 AM in LA… where in the hell is everyone? All these years – and late-night runs – later, I’m still surprised that I see so few human beings out and about at this time of night here in Los Angeles. Yes, I understand that people with “normal” jobs have to get up early in the morning, and can’t be out fucking around in the middle of the night. But this is the entertainment capital of the world. And I’m just curious why more of my fellow entertainers don’t take advantage of the solitude of late-night training. Sure, I suppose safety could be an issue for some. But it seems like even the thugs are asleep now! I typically see very few “gangsters” roaming around the North Hollywood/Burbank area this time of night. (And when I do, we ignore each other.)

All that aside, I’m 30 days out from a half-marathon I’ll be doing. Love the more structured training for this kind of thing! Will give a detailed report on my current regimen soon…”

Of note, although Rock points out that “gangsters” leave him alone when he’s training by himself in the wee hours of the night, which “gangster” would really want to confront Bobby Rock in the first place?