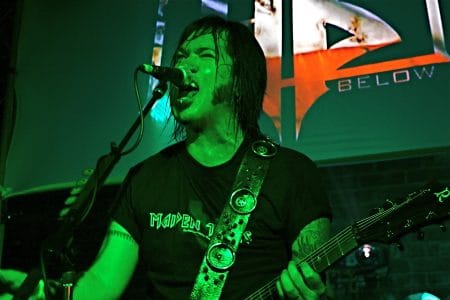 Lita Ford guitarist who also plays guitar in his own band called Heaven Below was recently interviewed by XS Rock editor Bobby Caughron and asked what was the strangest request that he has ever received from one of his fans.

Kennison replied: “One of our international fans requested a semen sample so she could impregnate herself.
We laughed and then got creeped out.”

Kennison was also asked about any outrageous road stories to which he replied: “Hmmmm, PG-rated….. The rest of the band and I once watched our former guitarist attempt to eat a pound of M&M’s while drinking milk live on the radio. It ended in projectile vomiting. It was hilarious and disgusting at the same time. The DJ said it was the funnest and sickest thing ever on his show.”

You can read the entire interview with Kennison at XS Rock.

Heaven Below are scheduled to release their third album Good Morning Apocalypse via the EMP Label Group on October 14, 2016.