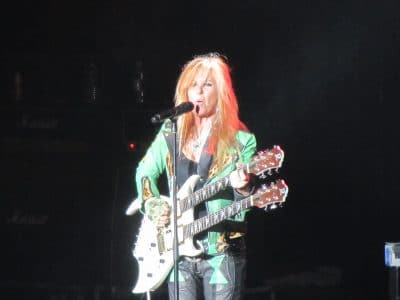 Lita Ford was recently interviewed by Guitars Exchange and was asked about whether there were any plans for a reunion with The Runaways. Ford replied: “Cherie [Currie] and I tried to get Joan [Jett] to work with us. We had dinner, we called her and we sent her emails, but we never really never got any response. I think most likely it was her manager who didn´t want her to do it.” When asked whether Cherie and her would be interested in doing a reunion if Joan Jett called one day, Ford replied: “In a heartbeat.. I’d love to do it . We miss Joan.”

In terms of what Ford has been up to, the guitarist stated: “We have played a lot of shows and I regularly go out running with the ‘Weekend Warriors’- it is insanity and a lot of fun. I have also been song-writing with Gary Hoey, the producer and co-writer of ‘Living like a Runaway’. Ever since that album he and I have been working together on this next one. I’m very excited about it. I hope to release it next year sometime.”

You can read the rest of the interview with Ford at Guitars Exchange.